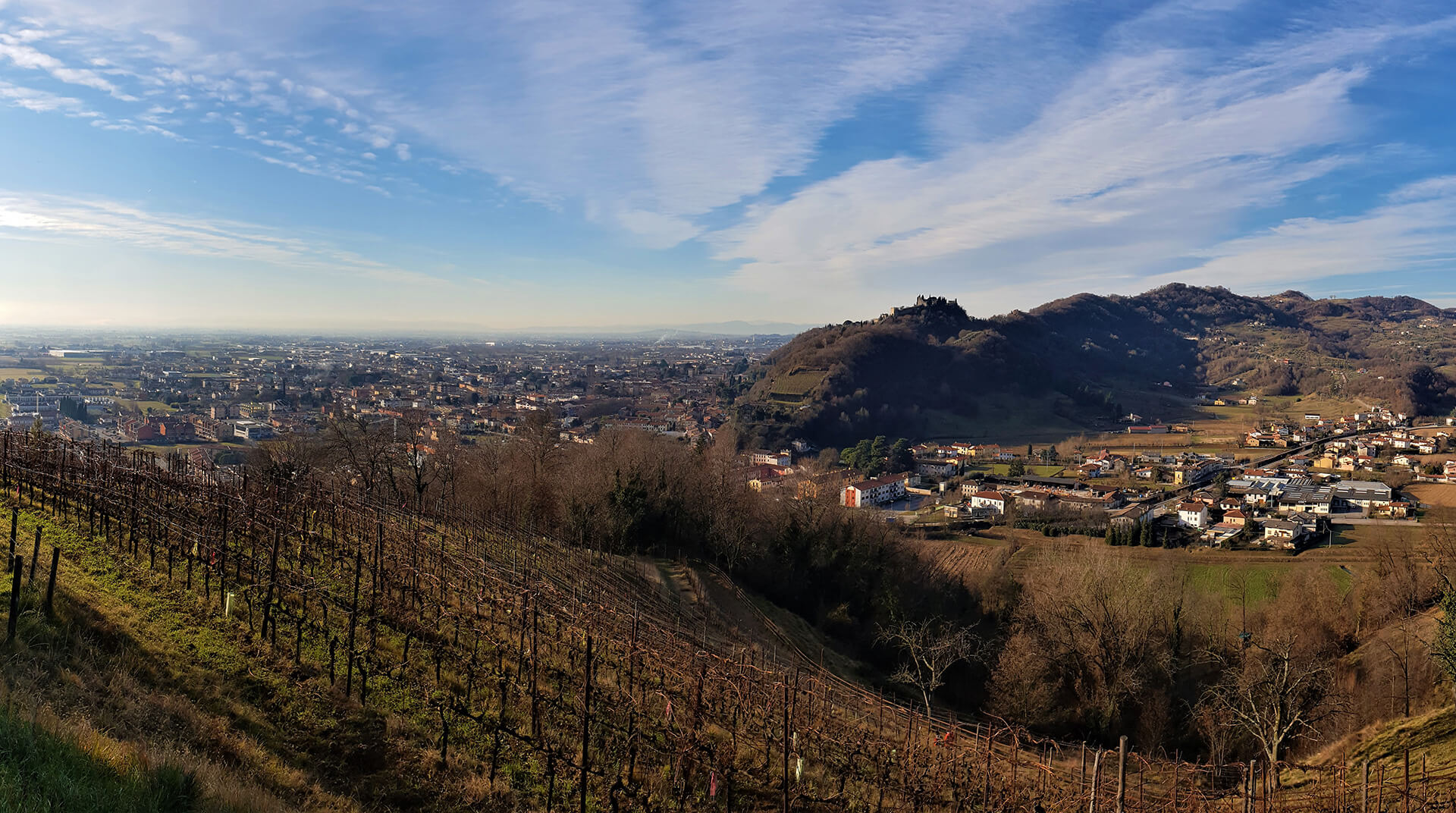 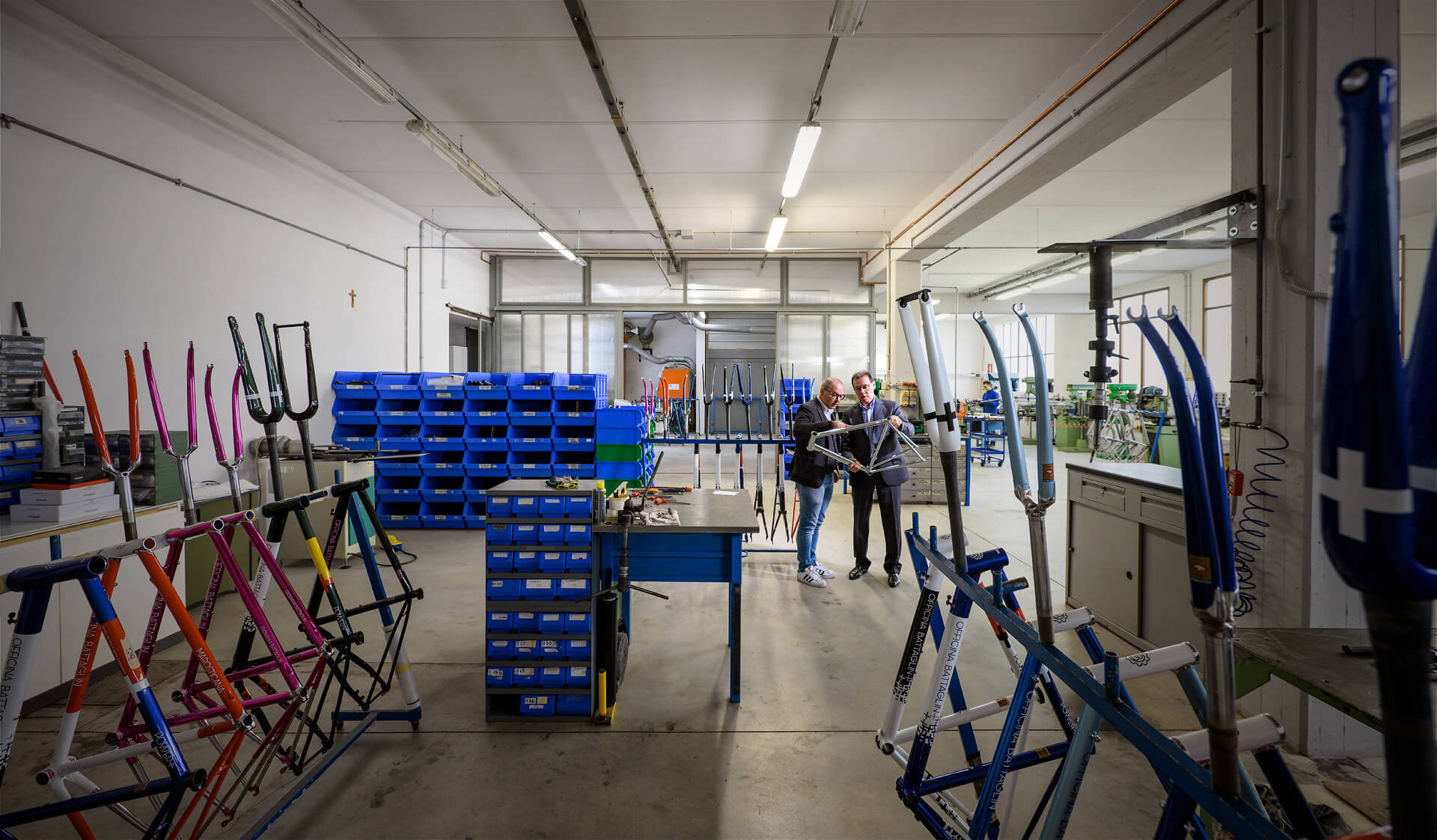 Officina Battaglin is an Italian brand of custom steel bikes.

Founded by Giovanni Battaglin, the legendary cyclist capable of winning the Giro d’Italia and the Vuelta a Espana in just 48 days, Officina Battaglin is dedicated to ensuring that every creation is truly bespoke.

In our workshop in Marostica, Italy, we build custom steel bikes to the owner’s specifications, with comfort as a constant.

Each frame we make bears the founder’s signature, thanks to exclusive Italian finishes and custom geometries designed by Giovanni Battaglin in person. 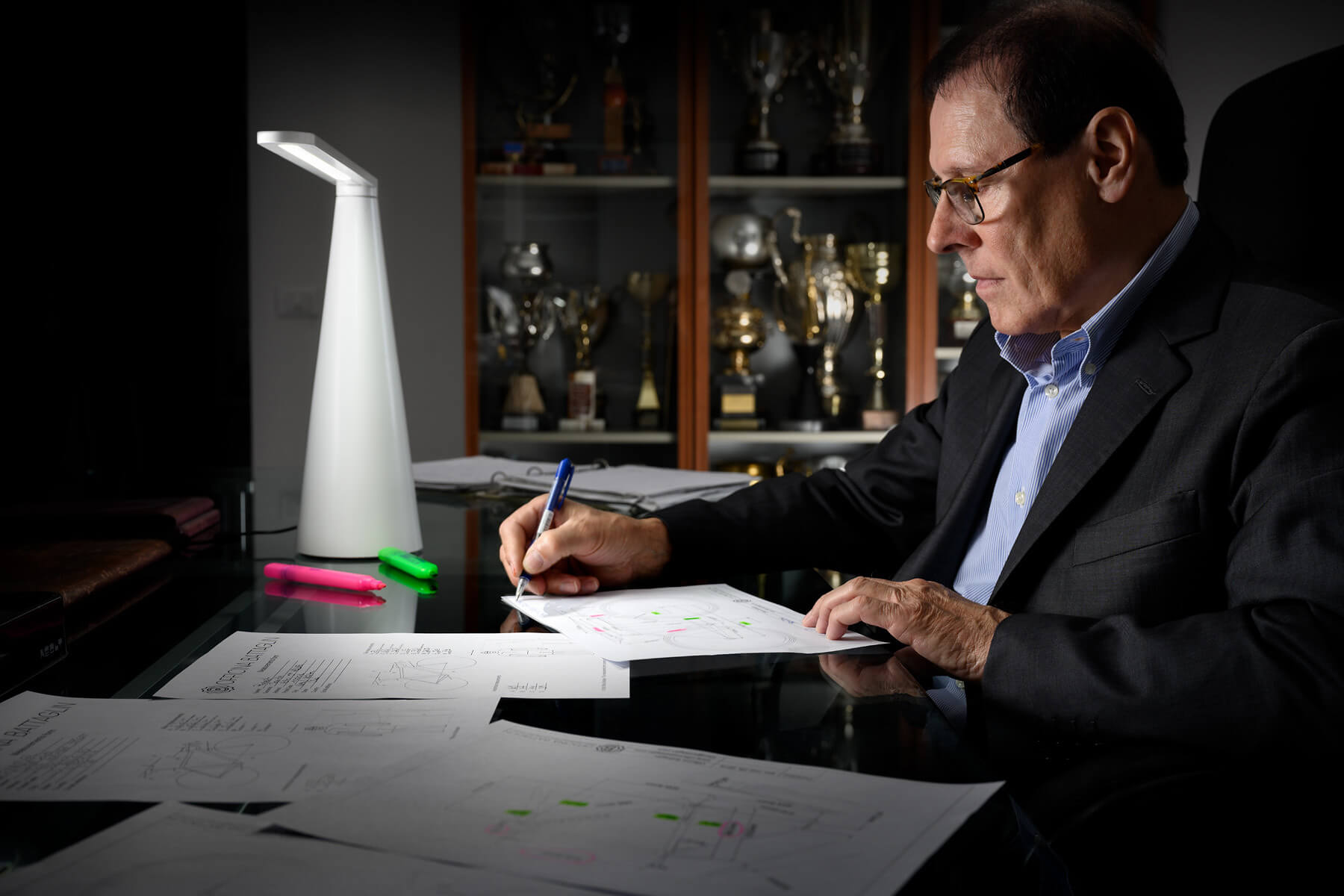 In the era of bicycle technology's obsession with lightness and stiffness, carbon seems to be the only choice when it comes to finding a new bike to explore new road feels.

But is shaving weight the only thing that matters?

Giovanni Battaglin asked himself this question in 2014, after 12 years of professional bike racing and more than 30 as a bicycle manufacturer.

In 1981, right after the Giro-Vuelta double, he launched the first racing bicycle models built in a small workshop in his hometown of Marostica, in the North-East of Italy, and bearing his name on the down tube.

In the following years,

Stephen Roche's Triple Crown and all the victories of the Carrera riders endorsed by the Battaglin steel bikes made the brand world-famous. 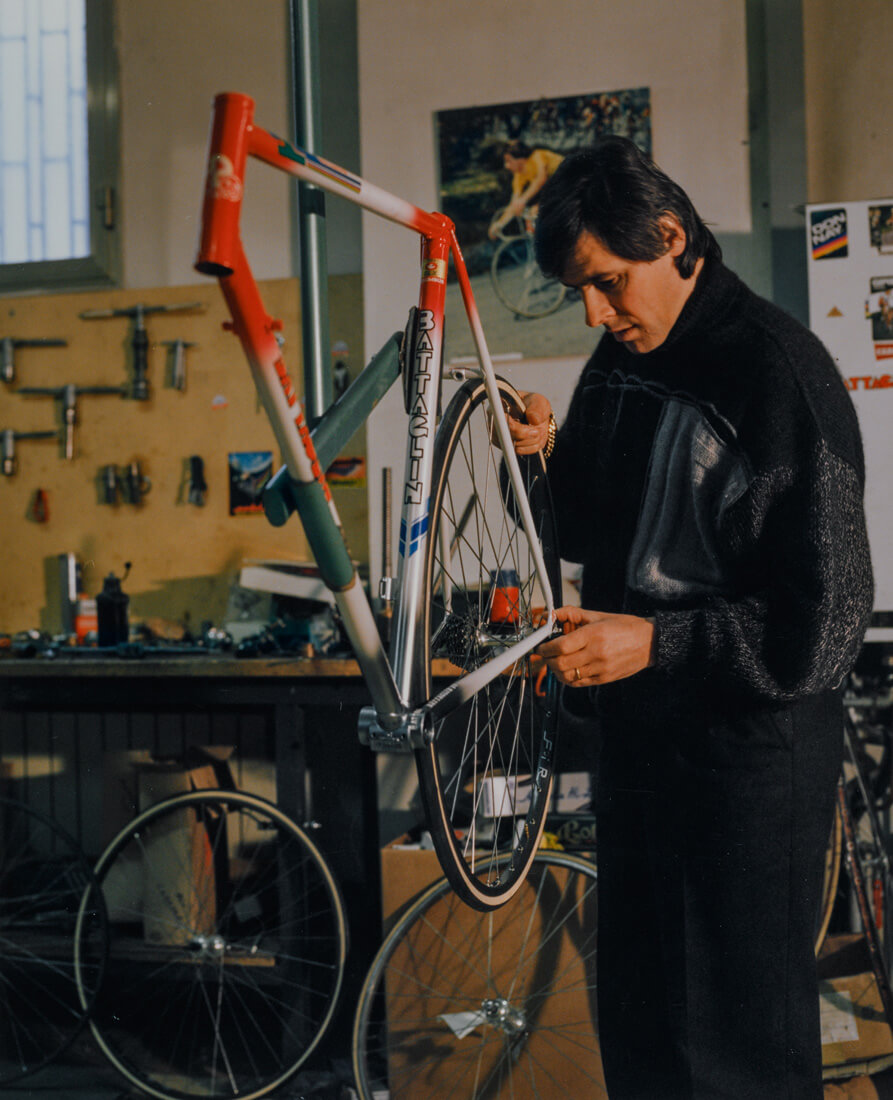 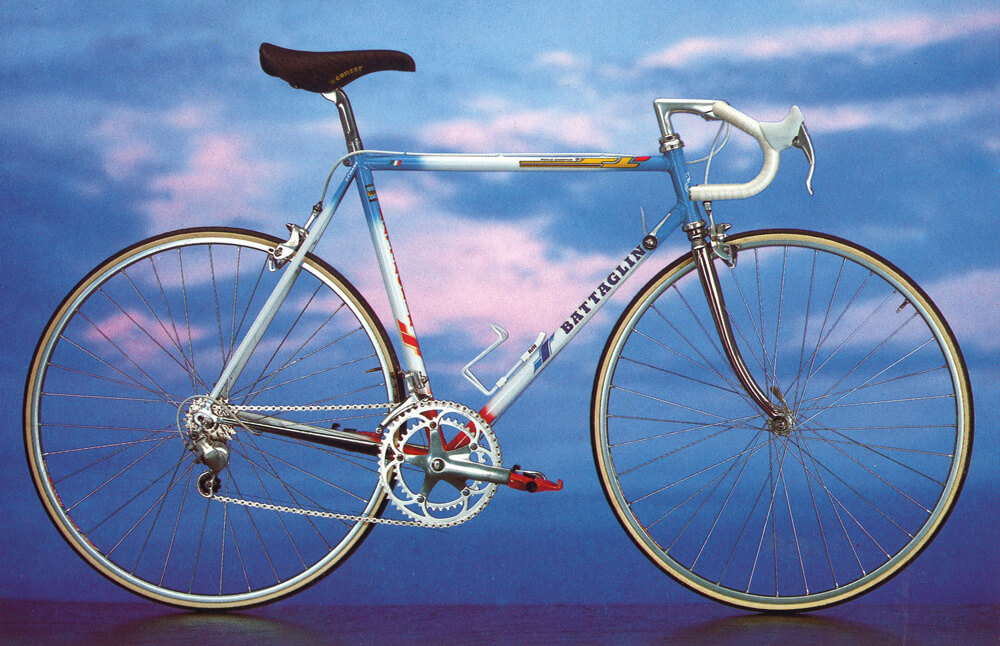 The bike industry is always hungry for new technologies, and the company started experimenting with lighter materials like aluminium and carbon.

The factory finally put steel aside.

But after a few years, Giovanni Battaglin felt that his expertise and legacy were lost.

So, in 2014 he decided to go back to brazing custom custom steel frames, dusting off the old machinery that was still in the workshop.

With the new Officina Battaglin brand, he returned to his roots. He returned to the exceptional craftsmanship that made his name known all around the world.

"Officina" is the Italian word for "workshop".

It's the place where Giovanni Battaglin is reviving his legacy as the only Italian steel maker that is also a Grand-Tour winner.

"I ALWAYS WANTED
TO MAKE THINGS DIFFERENTLY"
PLAY THE VIDEO 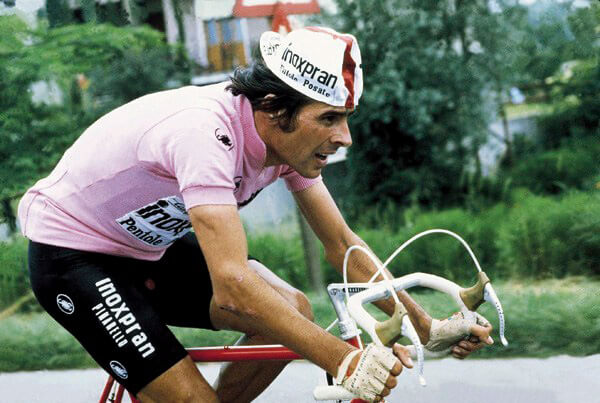 Grand-Tour victories are the line that separates good riders from champions. A first-place finish in the Giro d'Italia, the Vuelta a Espana or the Tour de France, the toughest races in the world, makes pretty hard to argue about a cyclist's greatness.

Giovanni Battaglin belongs to the elite group of riders that have won two Grand-Tours in the same year. As the second one in history to achieve the Giro-Vuelta double, he ranks among the most talented stage racers of all time.

Before him, only Eddy Merckx. After him, only Alberto Contador.

Winner of the Girobio (the main stage race of the amateur calendar) in 1972, he turned pro in 1973. That year, he won the single-day race Giro del Lazio, and he was third in the Giro d'Italia, sharing the podium with two icons like Eddy Merckx and Felice Gimondi.

At the time, the peloton was made up of some ferocious racers legitimately described as the most inspiring in history. Luis Ocaña, Joop Zotemelk, Freddy Maertens, Roger De Vlaeminck, Hennie Kuiper, Marino Basso, José Manuel Fuente: they all would ride to leave nothing on the table. There were no radio and in-ear headphones, just 6-speed steel bicycles and legs. The rhythm was always high, and the dominant verb in every race was "attack".

It was an era of talented athletes, and the explosion of the audacious Battaglin got him plenty of attention. The National Team couldn't ignore this emerging boy showing great promise, and they called him up for the World Championships.

While he had joined his older colleagues just a few months before, he was already representing his country.

BEFORE HIM, ONLY EDDY MERCKX.
AFTER HIM, ONLY ALBERTO CONTADOR. 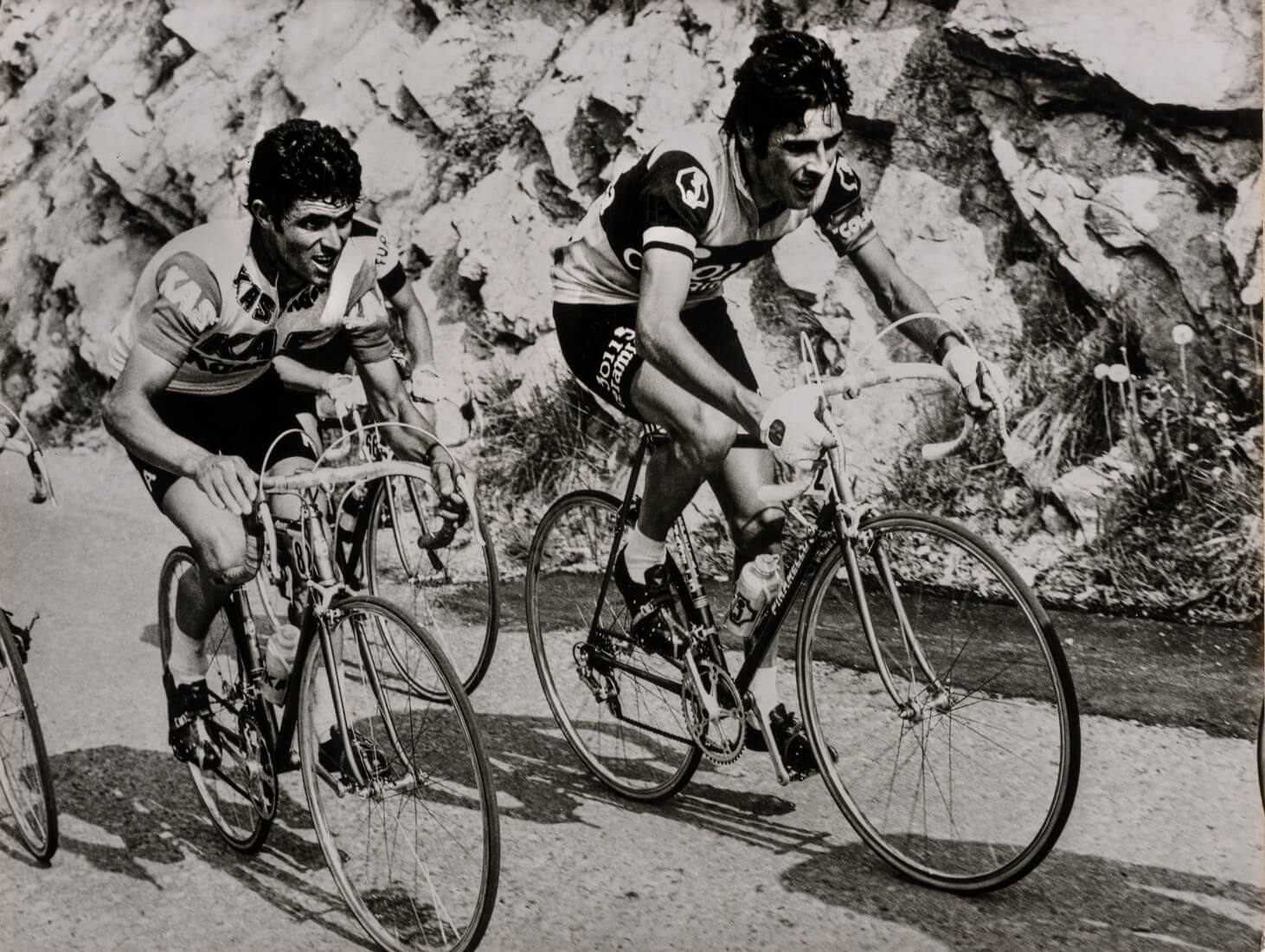 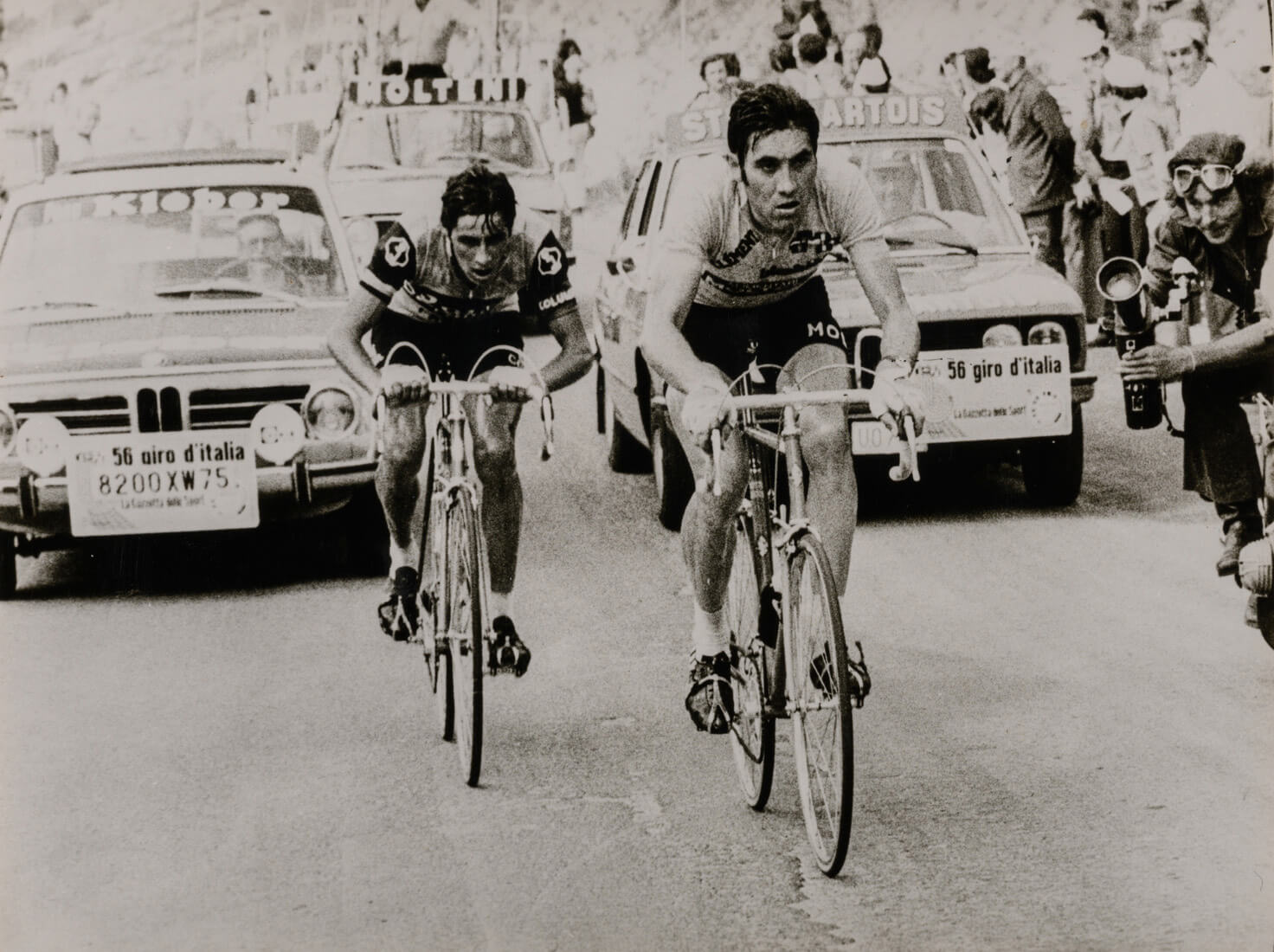 In 1974, Battaglin finished sixth overall in the Giro d'Italia, and he won the Giro dell'Appennino.

In 1975, he was the leader of the Jolly Ceramica team. He managed to win two stages in the Giro d'Italia and hang on to the Maglia Rosa (the pink jersey, worn by the leader of the General Classification during the race) for a couple of days. After the dominant victory in Forte dei Marmi, it seemed that Battaglin was finally ready to live up to the tifosi's expectations. However, he suffered a massive breakdown the day after.

A stage victory in the 1976 Tour de France was the only highlight of a difficult season for Battaglin, whose injuries kept him away from the peloton for a long time. He found himself at a crossroads in 1977, when the health problems made him think that he had already endured enough. He was about to leave bike racing, but in the end, he soldiered on.

In 1978, on the road back to recovery, he won three stages in the Tour of Switzerland and the Coppa Bernocchi. 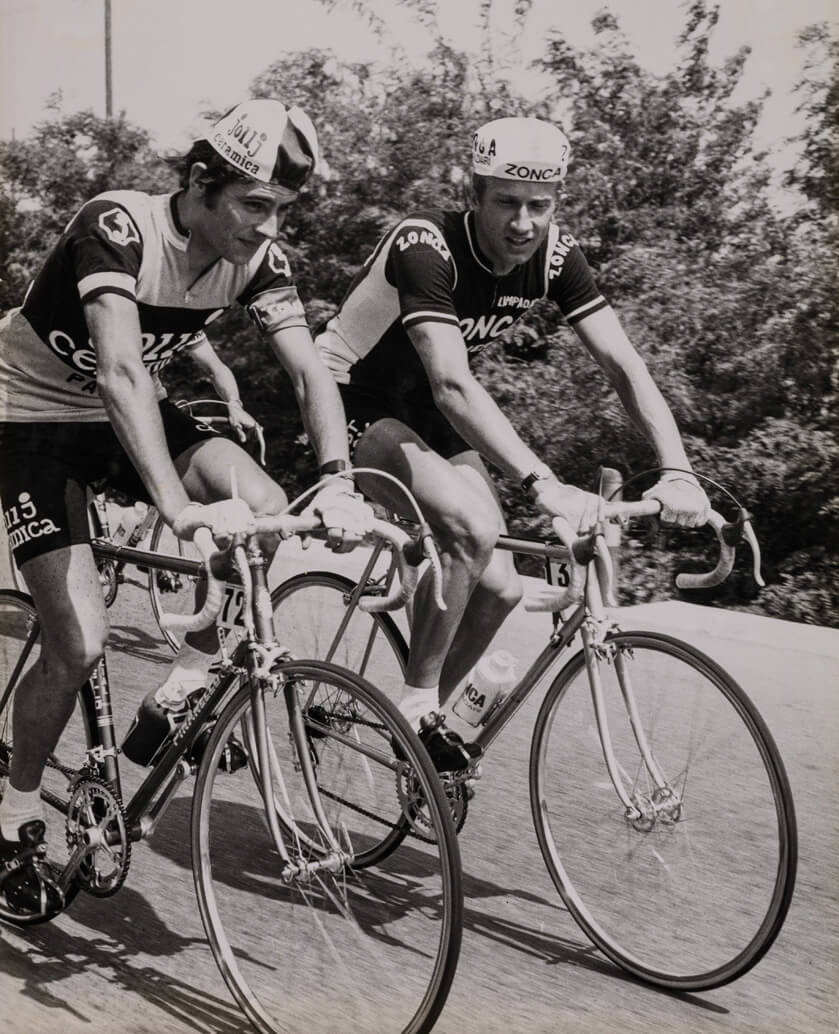 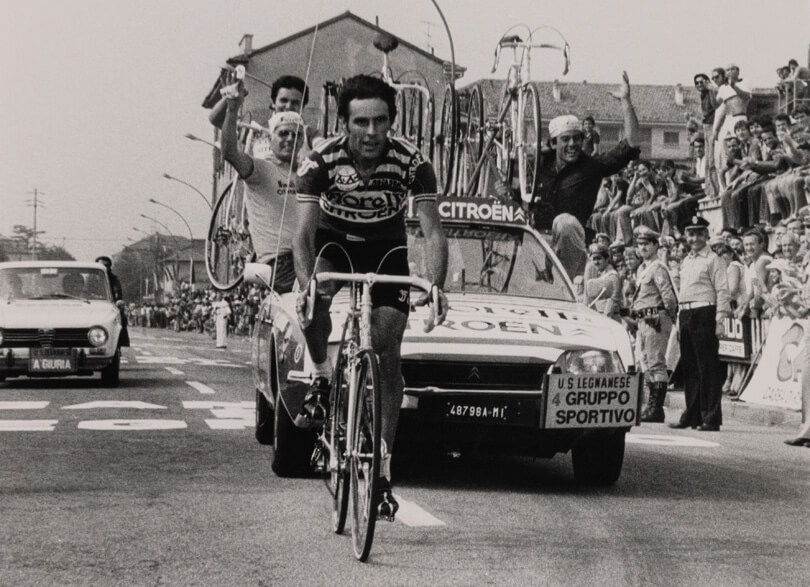 In 1979, he signed for the Inoxpran team. The directeur sportif Davide Boifava had the feeling that a world-class victory was around the corner, even if Battaglin had repeatedly failed in adding a memorable milestone to his palmarès.

While he had already proven to be a rider of persistence, joining the greats in the pantheon of cycling was the only way to sweep away all the accusations of unfulfilled potential.

That year he showed a superb condition.

He won the Tour of the Basque Country, some Italian single-day races, and the King of the Mountains title at the Tour de France. 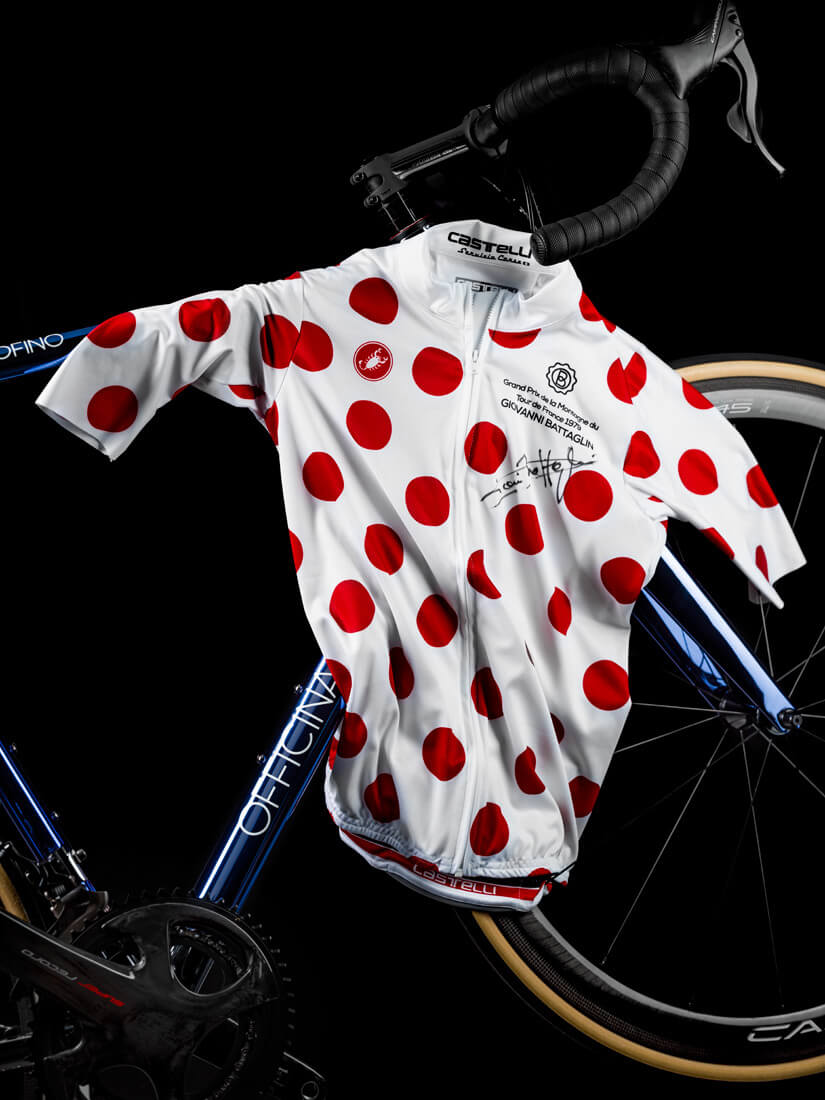 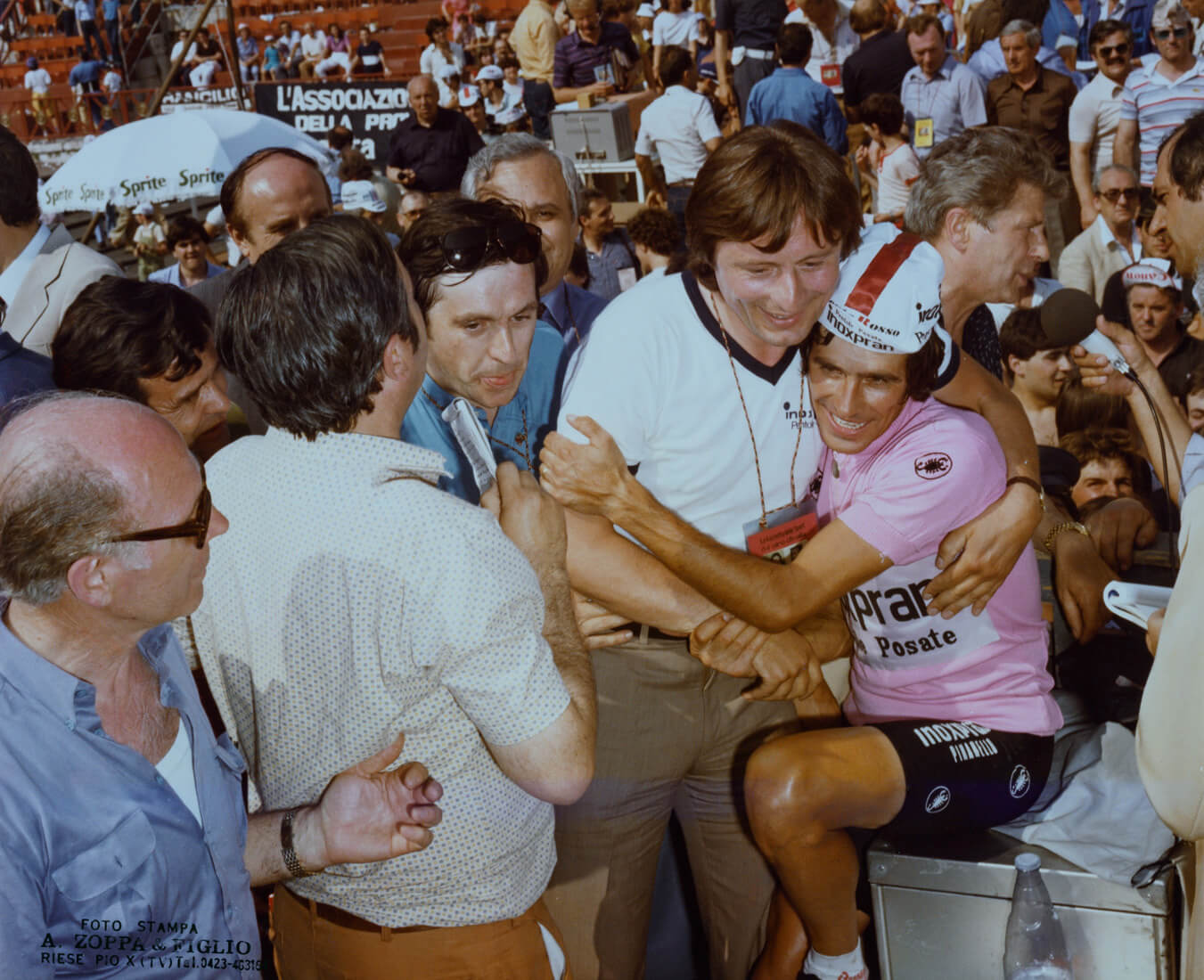 When Battaglin left for the World Championships in Valkenburg, he had his sights set on the rainbow jersey.

The race for the world title was very close. On the penultimate lap, Battaglin and other four riders pulled away from the group and managed to open a gap.

In the last few hundred of meters, Battaglin tried to outsprint the two contenders ahead of him, Raas and Thurau, who suddenly changed their direction and squeezed him into the barriers. Battaglin suffered a violent crash and arrived at the finish line by foot, losing the trophy that had seemed so close.

The defeat was devastating, and even if dealing with adversity wasn’t something new for him, today it still feels like a wound left open.

In 1980, he was third for the second time in the Giro d'Italia. Despite an epic stage victory in the mountains, his natural habitat, nobody was able to respond to Bernard Hinaul.

In 1981, the Inoxpran team focused its early-season efforts on the Vuelta a Espana. Battaglin's teammates were fully devoted to protecting him so he could target a place on the final podium.

The French Regis Clere kept the Amarillo jersey for 8 days, and he had to take it off when Battaglin faced the first big climb of the race, a 30-km time-trial from Granada to Sierra Nevada with an uphill finish. After the stage win, he pedaled inexorably towards the victory for 11 days. It was the first Grand-Tour of his display cabinet at last.

The Giro was scheduled three days after, and the fatigue of more than 3446 km of hard racing with no rest days wasn't something Battaglin and his team complained about. The 72 hours separating the two Grand-Tours flew by fast, and Battaglin found himself on the starting line in Trieste, in the North-East of Italy.

No one could imagine he was there with podium ambitions.

With Saronni and Moser's rivalry holding hostage all the newspapers' headlines, and the Bianchi-Piaggio team with Baronchelli-Contini- Prim trio, Battaglin didn't come to the Giro as one of the favorites.

BEFORE HIM, ONLY EDDY MERCKX.
AFTER HIM, ONLY ALBERTO CONTADOR. 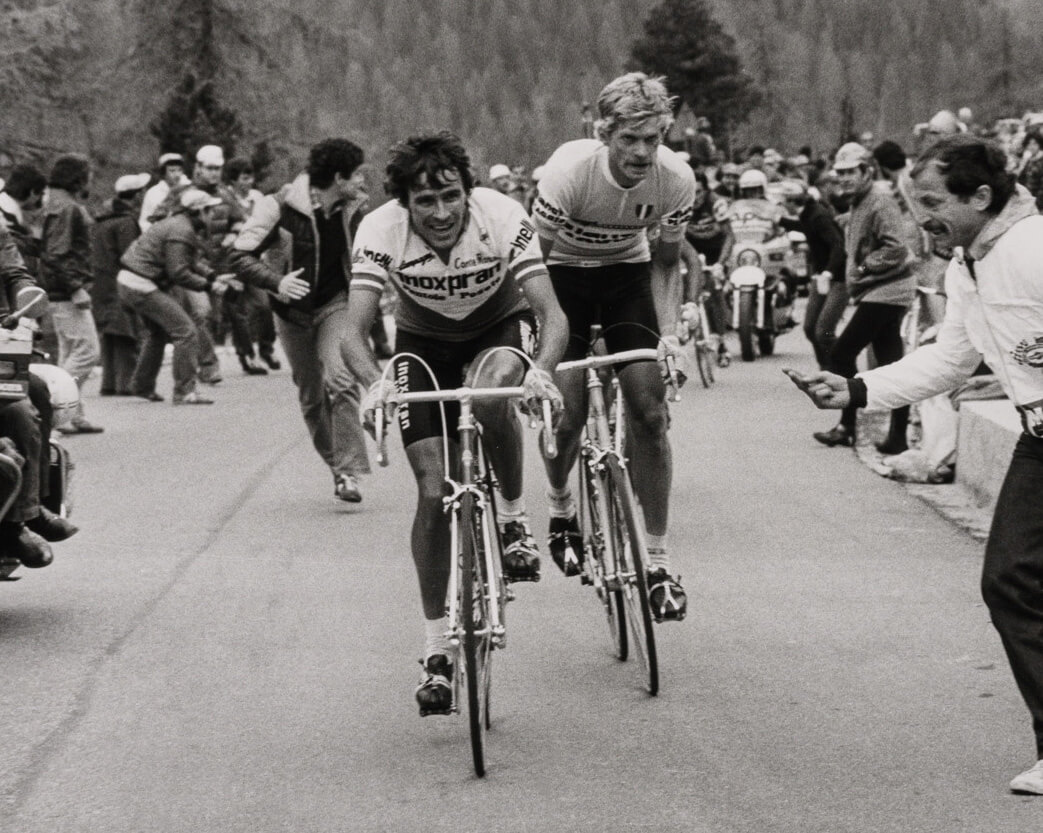 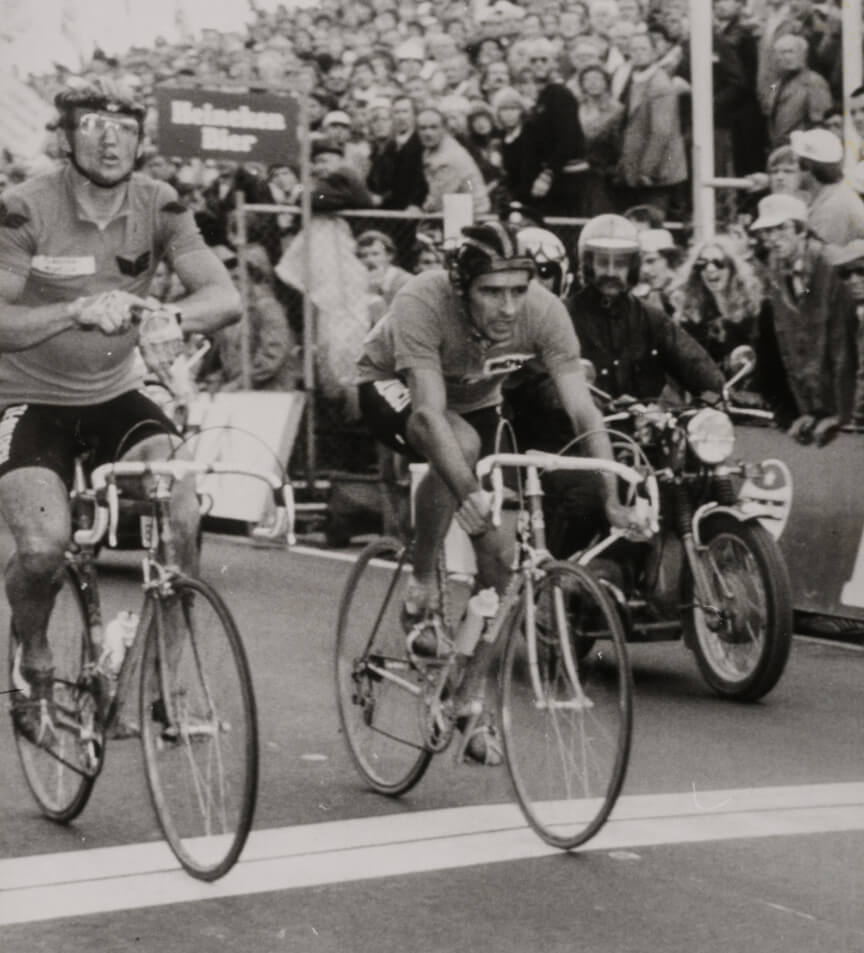 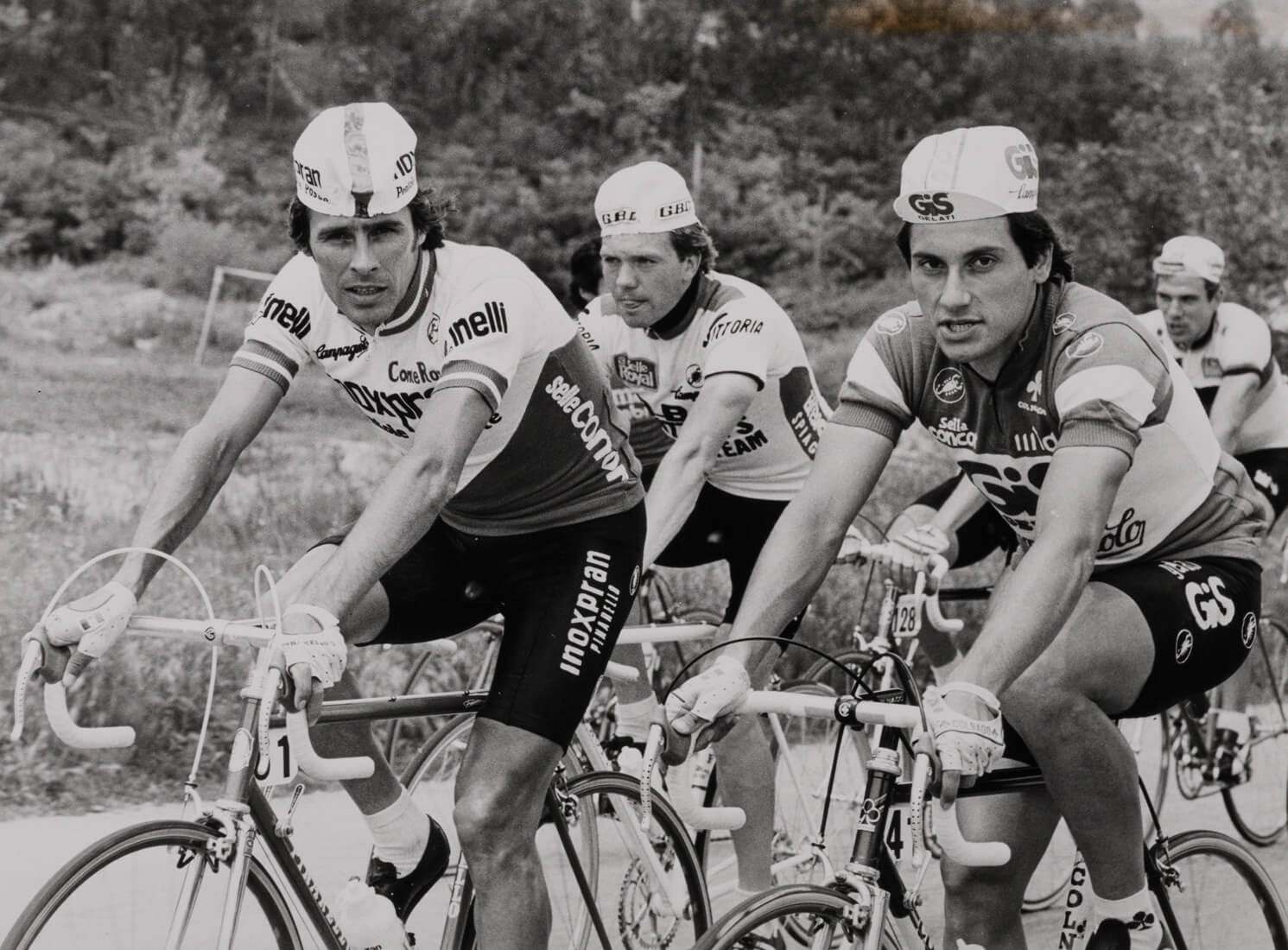 The designed route was more of a flat version of a race that was traditionally filled up with monstrous climbs. This time it definitely would favor explosive riders.

The classification remained unpredictable until the end. Battaglin's assault took place once again in the mountains, on the brutal ascent of the Tre Cime di Lavaredo. He managed to put in a cracking stage win and grab the pink jersey on the penultimate stage of the Giro.

However, the dynamic of the race in the previous days had shown he needed more than that to be in complete control and secure the lead.

The last and decisive stage was a 42-km time trial finishing in the Arena of Verona, the Roman amphitheater in the city center. Battaglin was leading Prim by 20 seconds, and Saronni was the most accustomed to race against the clock on a flat course.

When Battaglin entered the Roman amphitheater, he finally heard the crowd cheering and understood he had made history.

He rolled over the finish line, and he could finally raise his arms in pink, knowing that the jersey he was wearing would belong to him forever.

He had won the home tour, and he had won it in his home region.

"...HE FINALLY HEARD THE CROWD CHEERING AND UNDERSTOOD HE HAD MADE HISTORY." 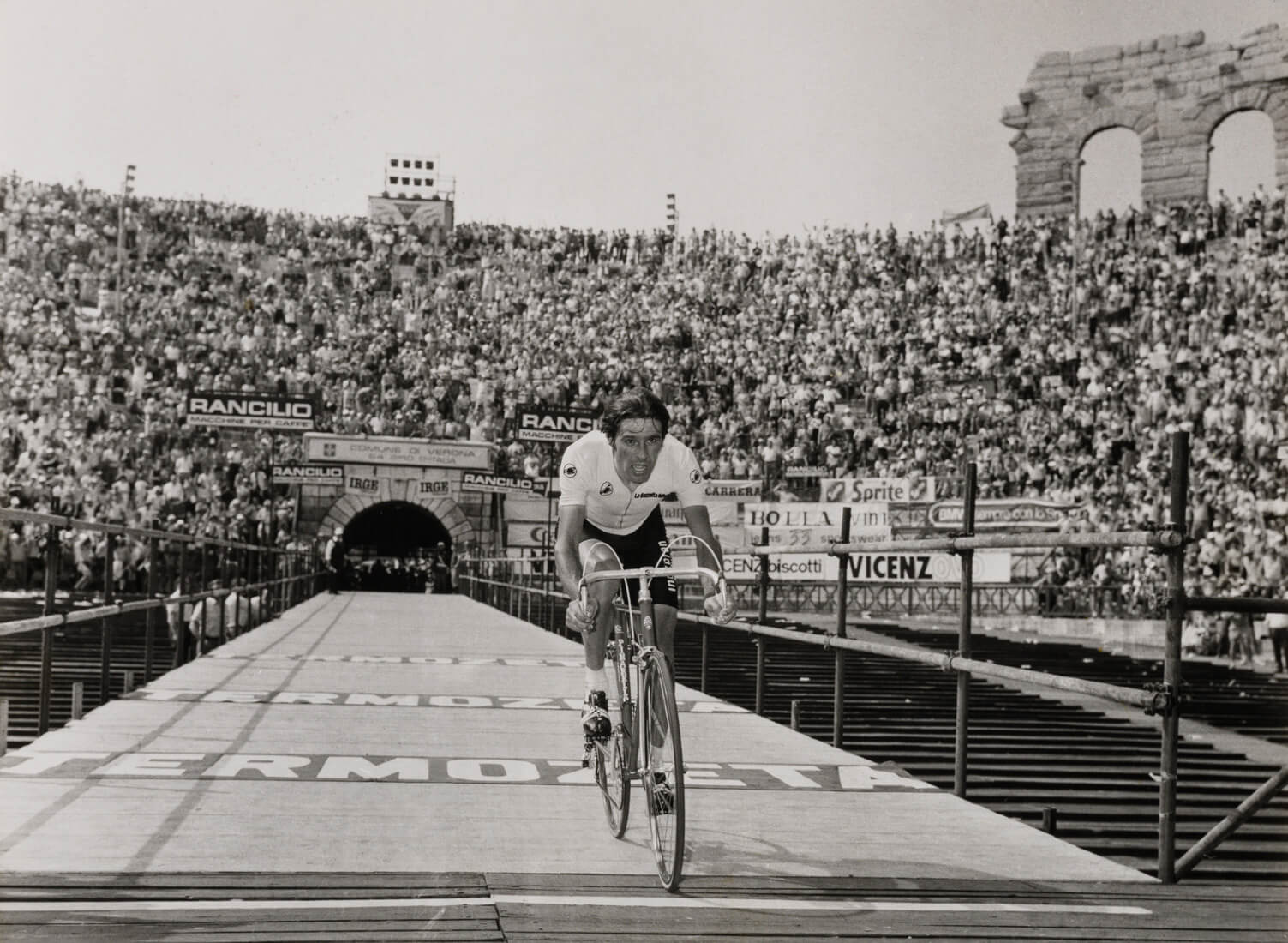 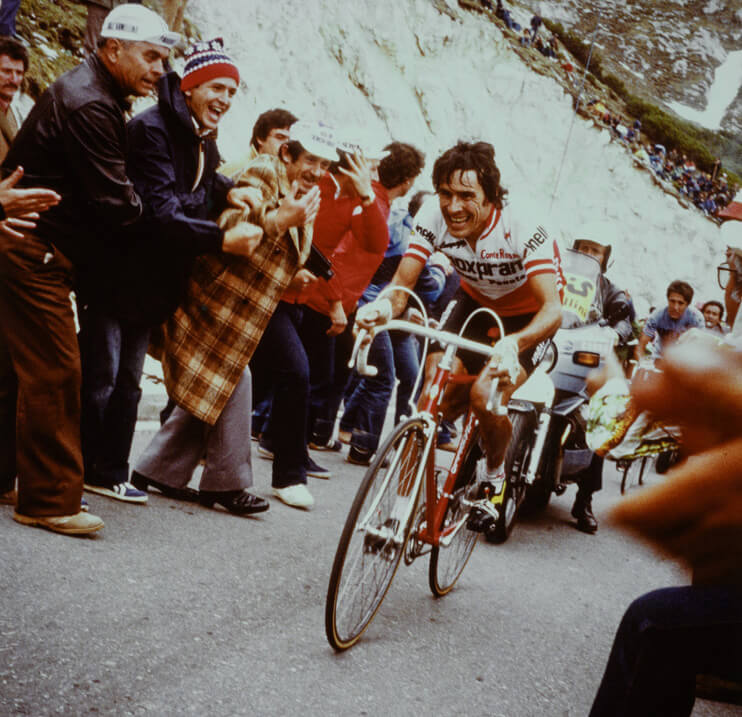 Want to know more about the Officina Battaglin bikes?