BEHIND A CUSTOM STEEL BIKE NEWS 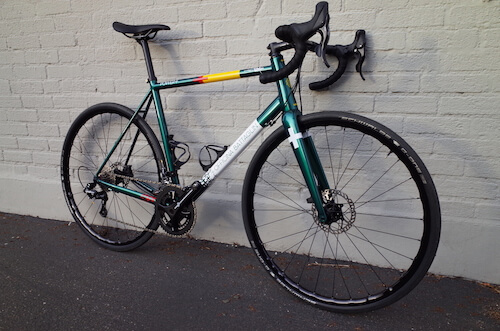 Today I want to share with you the story behind this custom steel bike.

Quite a singular paint scheme, isn’t it?

If you’re already familiar with our Power+ Disc steel frame, you might remember that its colors are quite different…

But Randy, the owner of the bike in the photo, didn’t settle on the standard option.

Instead, he picked custom colors inspired by an iconic racing car brand.

After working on choosing carefully the right hues, the final paint job makes for a one-of-a-kind Italian beauty that seems to have a color-changing capability.

And if you’re thinking about bespoke options for your dream bike but don’t know where to start, you’ll see exactly what goes on during an Italian custom steel frame’s building process.

Randy Shelton is an expert cyclist from San Francisco, USA.

He reached out to Officina Battaglin because he wanted a steel disc brake “all road” bike made from scratch for him in Italy.

A true Italian steel race machine that he could take on paved and fire roads in the San Francisco area.

But Randy wanted his bike to be unique.

Style did matter to him.

And he wanted to achieve that uniqueness by choosing custom colors that reflected his passion for the classic Lotus cars and motorbikes.

If you’re familiar with the brand, I’m quite sure you’ve already spotted the tribute to Lotus on the bike.

But let me describe the process in detail.

The first step was figuring out Randy’s frame size and designing the best geometry for his style and body shape.

With my father Giovanni Battaglin’s 45-year experience, there’s no way we could get it wrong.

So, after building the Power+ Disc frame to Randy’s measurements (he’s a tall guy and he needed a quite big size), the moment came.

The moment to pick the colors and adapt the paint scheme to his desires.

I asked him to send me the Lotus cars and the motorbikes he liked.

I’ll be honest with you: when I saw the pics, I thought that green and yellow was a bizarre color combo on a bike frame.

And I was afraid that it would have taken away much of the Power+’s racy look.

But the great thing about building bicycles from scratch is that you can always create something new and unique.

You don’t have to settle on standard colors, trying to find a compromise between technical features and the look of the bike.

You can work on your project until you come up with exactly what you want.

So, based on Lotus’ iconic colors, our design team created the first proposal.

The concept of the proposal was adopting the iconic green as the dominant color.

Now we had something to work on. But neither Randy nor I was still satisfied, and we had another call.

He explained what he had in mind and that he wanted to add some red details.

Finally, I had the vision of how that frame had to be painted to be a real head turner.

I said to him “Now trust me, I’ll make something special for you”.

I asked the painter to use a metallic green so the color was deeper.

The etched parts had to be yellow.

The “+” patterns on the chainstay and the big “+” sign on the top tube had to be red.

When I picked the frame at the painter, I couldn’t believe how cool it was.

The metallic green was pure class. The frame seemed to change colors depending on the light!

I just want to say thank you for taking care of me during the order process. I received the frameset and was finally able to build it up. I’ve been riding it for a few weeks now. Here are my impressions. The bike looks amazing. Thank you for working with me on the paint. I know the green, yellow and red color combo probably seemed odd at the time but it came out better than expected. The metallic green is like no other I’ve seen. It seems to change colors depending on the light!

Paired with the all black gruppo, cockpit and wheels, it just looks like a modern classic Italian racer. Also, the fillet brazing and bottom bracket welding is perfection.

As you’ve just read, the look of the frame was very important to Randy.

But he didn’t want a frame to hang on a wall.

He wanted a frame to build up, and he assembled it with a Campagnolo Potenza.

If you’re still reading, you’re probably curious about how the bike rides.

I find myself aiming it at potholes and bumps in the road and laughing at how well it absorbs everything.

It has that “steel is real” spring feel to it. I’m sure that the 30c tires help but this frameset is next-level when it comes to road feel.

Climbing and descending is phenomenal.

I didn’t build the frameset up with the lightest parts so the bike came out to 20lbs, which I think is actually amazing given that it’s an XL steel frame and I used an all aluminum gruppo, 28h aluminum rims and hydraulic brakes.

The only carbon on this bike is the fork, the bottle cages and the saddle.

My last bike was actually 18 lbs and although the Power+ feels a lot different, it doesn’t feel slower or heavier.

I will need to do some bigger climbs to really get a sense of how fast I can make it ascend but so far, I’m impressed. Anyway, I’m sure that 2 extra lbs is just going to make me stronger 🙂

Descending is smooth fast and predictable. Rough turns are also easier to navigate than on my old bike.

I’m sure the fatter tires and slightly longer wheelbase of the Power+ help in this area. It just feels stable while going fast downhill.

I built this frameset up as my “all road” bike.

I may race it on occasion and will definitely be taking it on the fire roads and gravel where I live. ”

Do you want to discover Giovanni Battaglin’s secret formula to building a custom steel bike that rides like a dream?

Now you can access our FREE video series “The Man of Steel” and get a behind-the-scenes look at the specific process used by the 1981 Giro winner in his eponymous bike workshop in Italy.