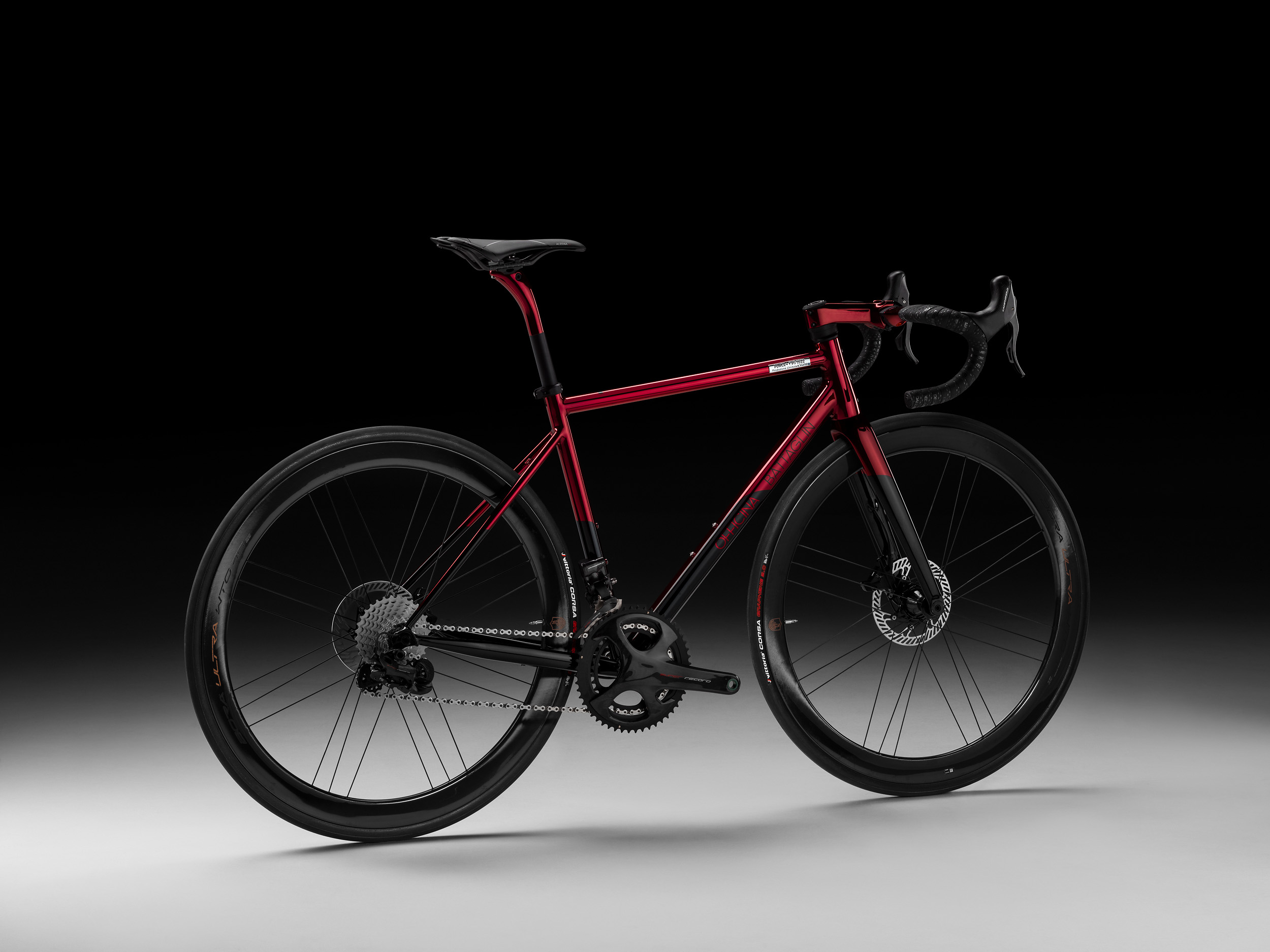 When Giovanni and Alex Battaglin unveiled the Officina Battaglin Power+ in 2014, it was clear that his comeback to steel after almost 20 years wasn’t just a nod to the old glory days. While the paint scheme was a contemporary interpretation of a legendary Battaglin model ridden by the Refin-Mobilvetta pro team in the late 90s, the new Power+ combined all the characteristics of a modern race-ready machine.

Oversized tubing, smooth fillet-brazed joints, and a frame designed to embrace the latest cycling technology: Giovanni and Alex showed to the world how modern a steel road bike could look and feel.

In the following years, the Power+ became the most popular model of the Officina Battaglin collection. In his workshop, the former Giro winner and his son built hundreds of custom Power+ frames and bikes for hundreds of cyclists all over the world. In all their testimonials, there was a recurring theme: the unique blend of steel’s superb comfort and a very responsive ride made them forget about their carbon racers.

Bicycling’s Editor-in-Chief Bill Strickland said, “The Power+ just might be the best all-around steel bike. More than any steel bike I’ve tested, it combines the classic smooth and springy quality of steel frames with the agility and aggressiveness of the best modern race bikes”.

But Giovanni Battaglin didn’t rest on his laurels. As a bike manufacturer, he’s always been known for being a true innovator. And he wanted to push the Power+’s sleek look and modern performance even further.

The new wireless groupsets and the new integrated cockpit systems offered a great opportunity. But there weren’t any steel tubesets on the market suitable for routing the brake and derailleur cables internally.

Giovanni and Alex worked with Columbus to develop new specifications for the Columbus Spirit HSS tubing and design the frame around the Deda Elementi DCR headset.

The final result was a game-changing concept. It was the ultimate evolution of the modern steel bike:

Thanks to the special design developed with integration in mind, the Power+ EVO takes steel’s contemporary aesthetics a step further.

The Power+ EVO is the first steel frame designed for a fully integrated cockpit with completely hidden, internal cable routing.

The sleek look with no visible cables is what makes the Power+ EVO really stand out.

In fact, we engineered the head tube and downtube shape to work in conjunction with the DCR headset, which allows for totally concealed cable routing when paired with the Deda Vinci bar and stem or the integrated Alanera bar. If you love the idea of a custom build that hides all the cables and wires, with the Power+ EVO you’ll enjoy the cleanest look ever on a steel bike. 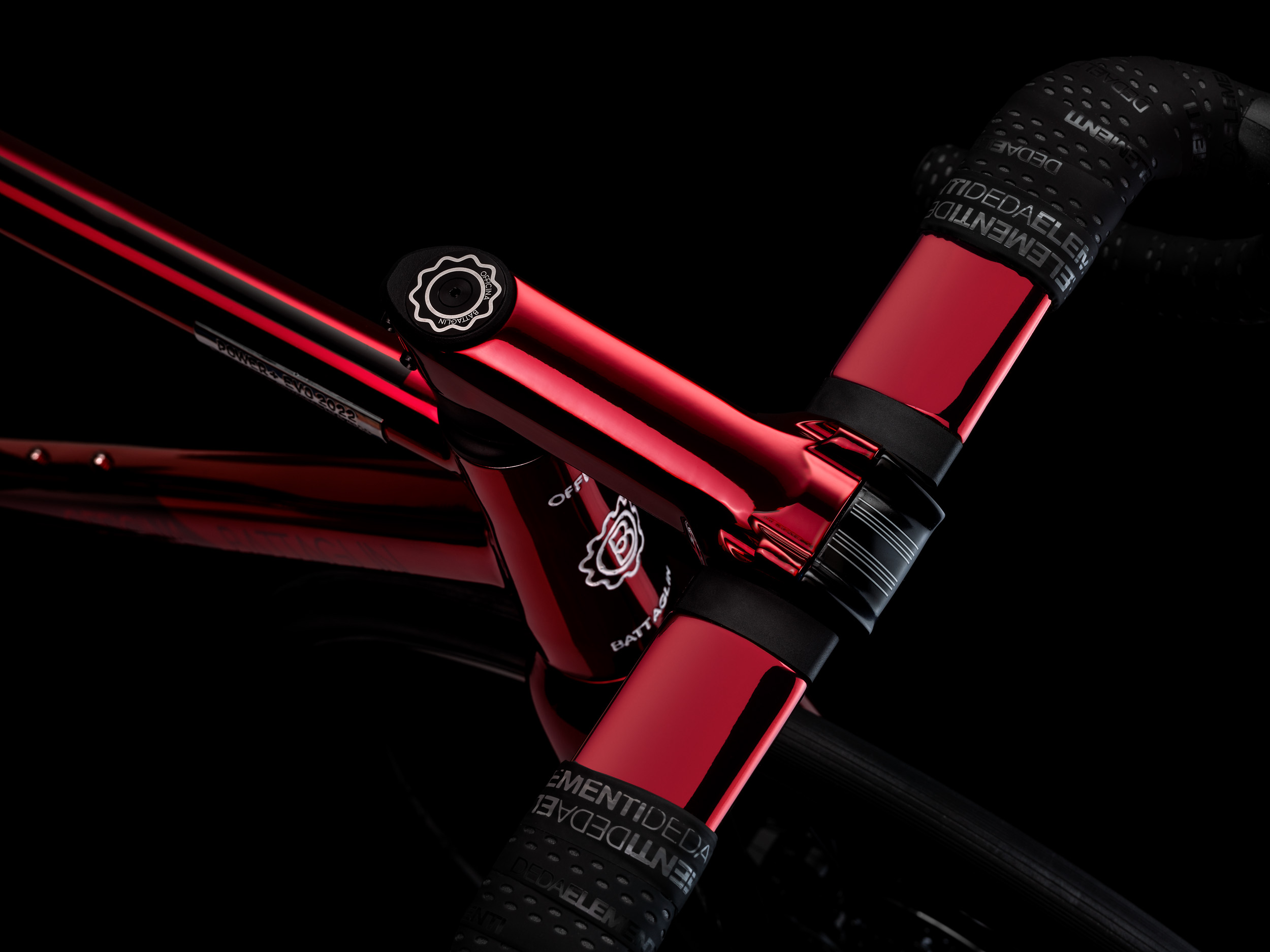 We want to create a dream bike that fits your specific preferences while offering you an unforgettable, personalized experience.

But discussing the endless possibilities of a custom build so you can identify your own style requires a lot of time and dedication.

That’s why we’ve decided to cap this year’s production to only 50 custom frames (or complete bikes).

Each Power+ EVO 2021 we make comes with a numbered plate brazed to the top tube that authenticates its uniqueness and makes it an exclusive item to treasure forever. 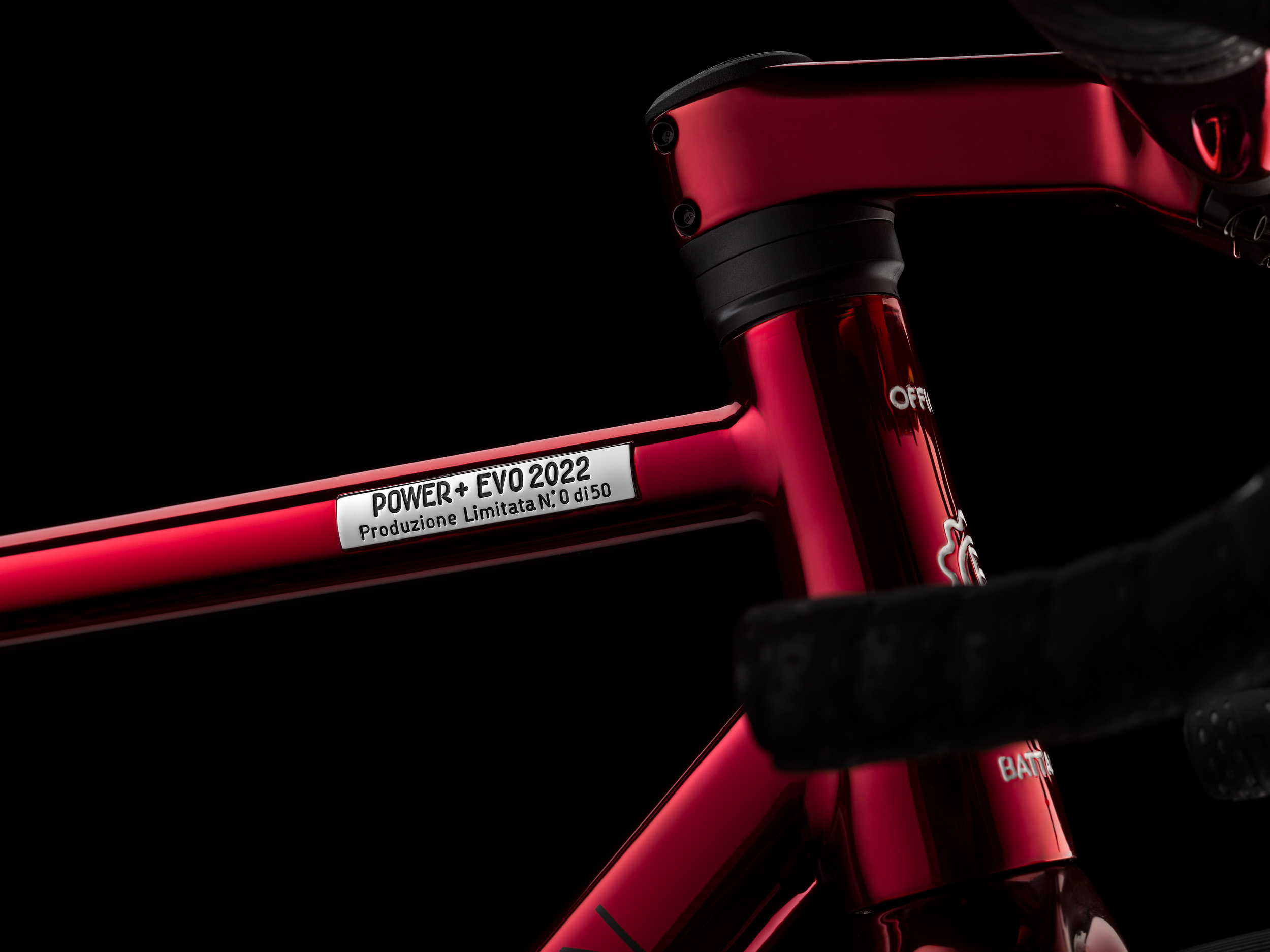 The 100% internal cable routing won’t be the only detail giving your Power+ EVO its exclusive and unique look.

In fact, one of the most exciting parts of the building process will be working on the paint job of your frame and bike.

If you want your custom Power+ EVO to look different from any other bike you and your cycling friends have ever seen, the cromovelato is the one single finish that will elevate your bike to a work of art.

Customize your frame, stem, handlebar and seatpost with your favorite cromovelato color. And enjoy the translucent effect gleaming in the sunlight that only Italian expert craftsmen can create for you. 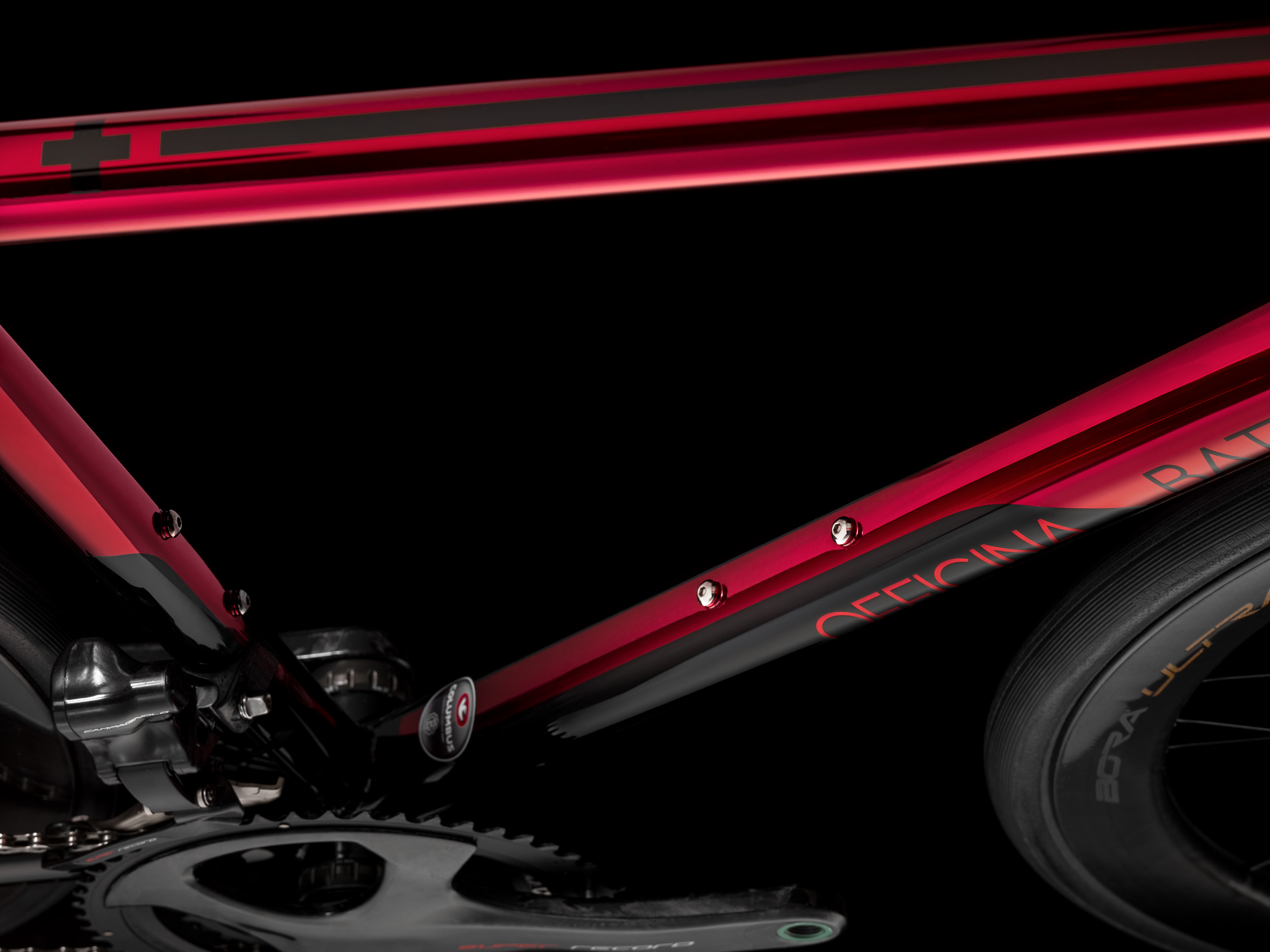 You can order a custom Power+ EVO direct from Officina Battaglin and enjoy the full experience of building a frameset or bike tailor-made to your preferences.

The price for a Power+ EVO frameset custom-made for you in the Battaglin workshop starts at 5.000 €. 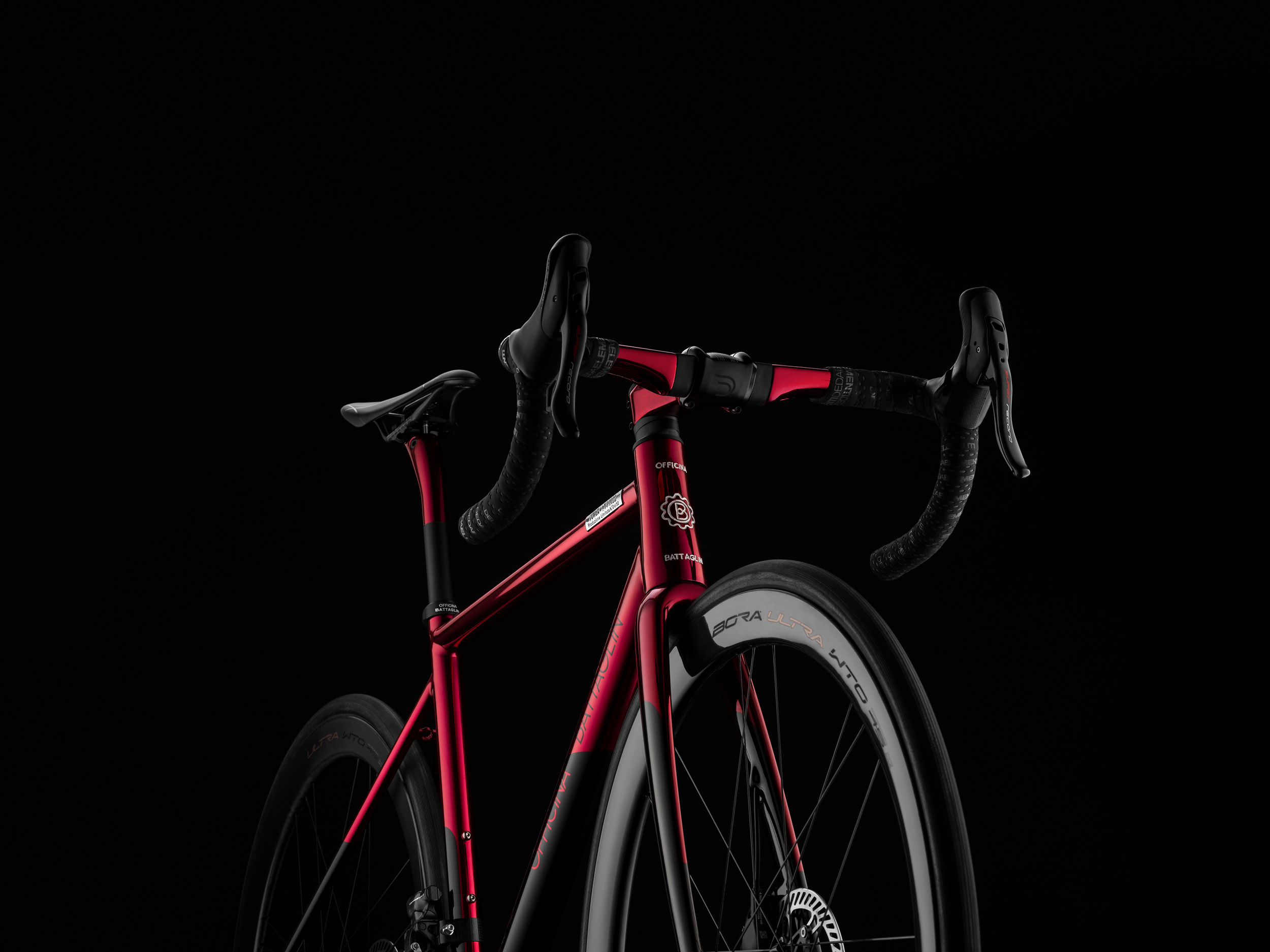 Want to know more about the building process for a custom Power+ EVO?

Sign up with your email address to receive a FREE video presentation showing you how the building process for a custom Power+ EVO works.