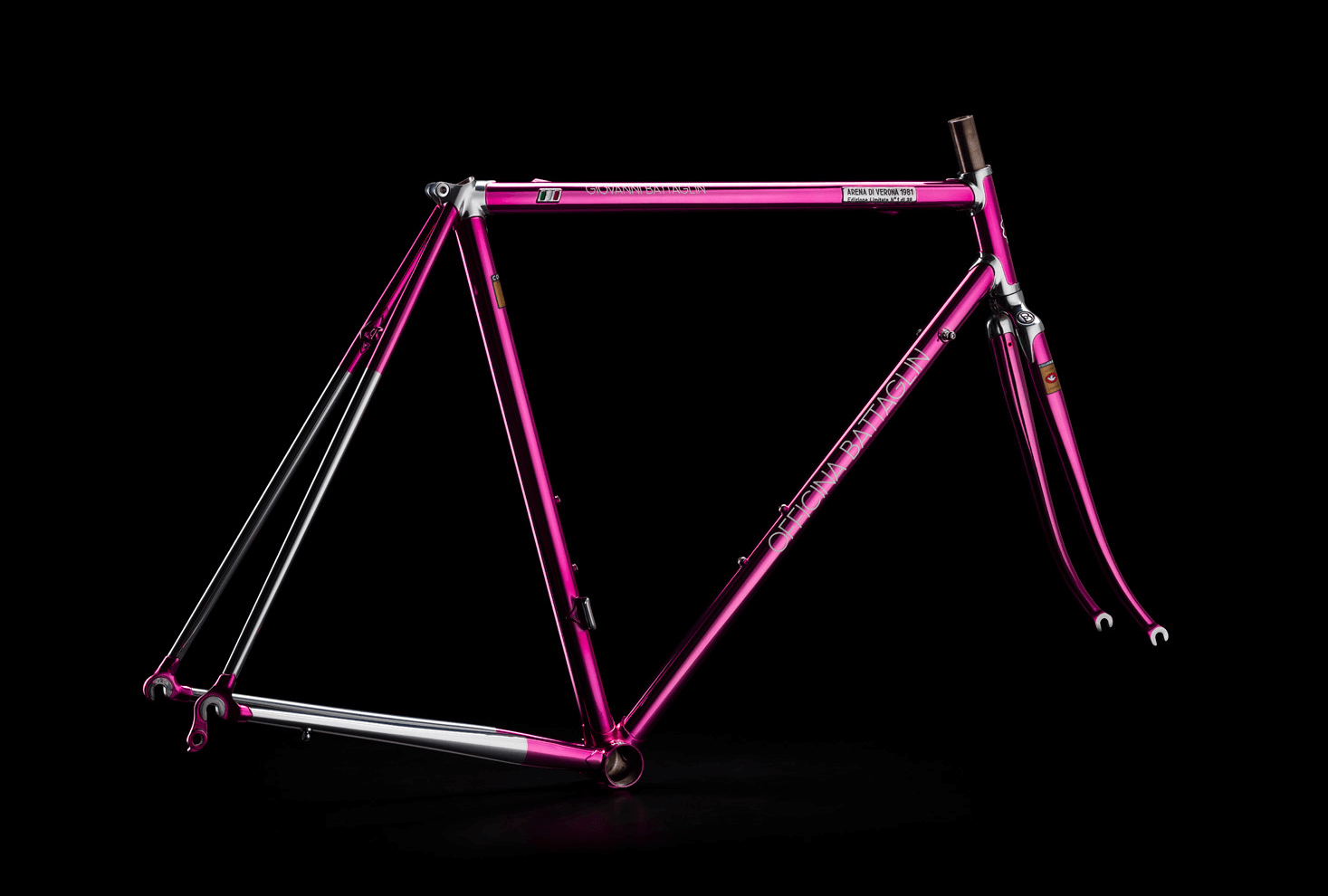 In ancient Rome, people would gather in large amphitheaters to see blood sports.

Inside huge open-air stone venues, well-trained combatants would fight to the death surrounded by a loud crowd.

They would fight not only for freedom but also for fame and glory. Some of them would become popular heroes.

The Verona Arena, in the North-East of Italy, was one of those amphitheaters that would host gladiator fights.

After the falling of the Roman Empire and throughout history, it was used for a variety of purposes – as a hiding place, as a confinement site, and for operas and ballets in more recent years.

But on June 7, 1981, another battle was fought inside the ancient amphitheater of Verona.

This time not with swords or spears.

This time it was a battle between the best cyclists of the world, who challenged each other in a race against the clock.

It was the final stage of the 1981 Giro d’Italia, a 42-km time trial with the finish line inside the Arena.

Giovanni Battaglin was wearing the Pink Jersey. He had taken it on the stage before, climbing the brutal ascent of the 3 Cime di Lavaredo.

With the two main contenders Prim and Saronni less than a minute behind him in the General Classification, the race was nowhere near decided.

The final stage was uncertain until Giovanni Battaglin rolled into the Arena.

As soon as he entered through the stone arches and crossed the finish line, he heard more than 15.000 people chanting “Gio-van-ni! Gio-van-ni!”. At that moment, he realized he was the 1981 Giro champion.

That’s how Giovanni Battaglin became the first cyclist to win the Pink Race inside the Verona Arena.

In fact, the final stage of the Giro d’Italia 2019 was a time trial with the finish line inside the amphitheater.

At Officina Battaglin, we’ve celebrated the return of the Giro’s final stage to the same venue where Giovanni was crowned the 1981 Giro winner with a special frameset:

Arena 1981 is a lugged steel frameset handmade in the Battaglin workshop. It has been produced in a very limited run of 38 pieces, which are now completely sold out.

As the Collezione Speciale frameset launched in 2016, Arena 1981 is part of Giovanni Battaglin’s personal collection of steel frames celebrating the milestones of his career.

It’s a special jewel for a special anniversary, designed with the discerning collector in mind: a numbered plate brazed to the top tube authenticates its uniqueness.

But what makes these 38 frames even more desirable is the racing pedigree behind their construction.

Each piece has been custom made to the owner’s measurements, after an individual sizing consultation with Giovanni Battaglin in person. 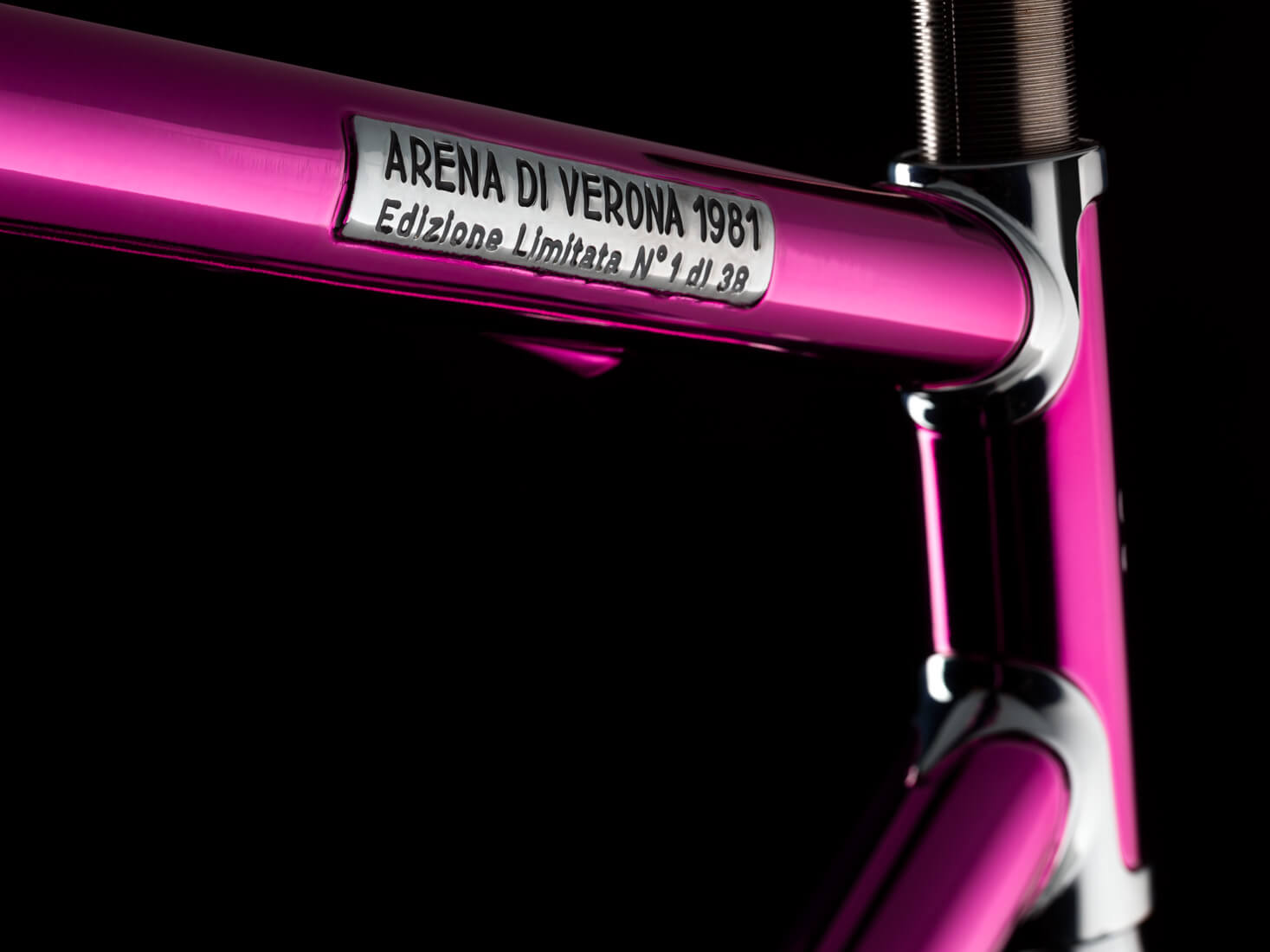 The Arena 1981 is built from Columbus SL tubing.

For a frame that celebrates Giovanni Battaglin’s legendary career, choosing the best Italian tubing manufacturer was a must.

The skinny look of the SL tube set brings to mind the best Italian racing bikes from the 80s. And the high-quality steel provides the comfort that makes for an inimitable ride feel.

Like the most exclusive Italian framesets, the Arena 1981 is embellished by chrome lugs.

The shiny chrome magnifies the beauty of lugged construction, creating the distinct Italian look that all cycling connoisseurs recognize. 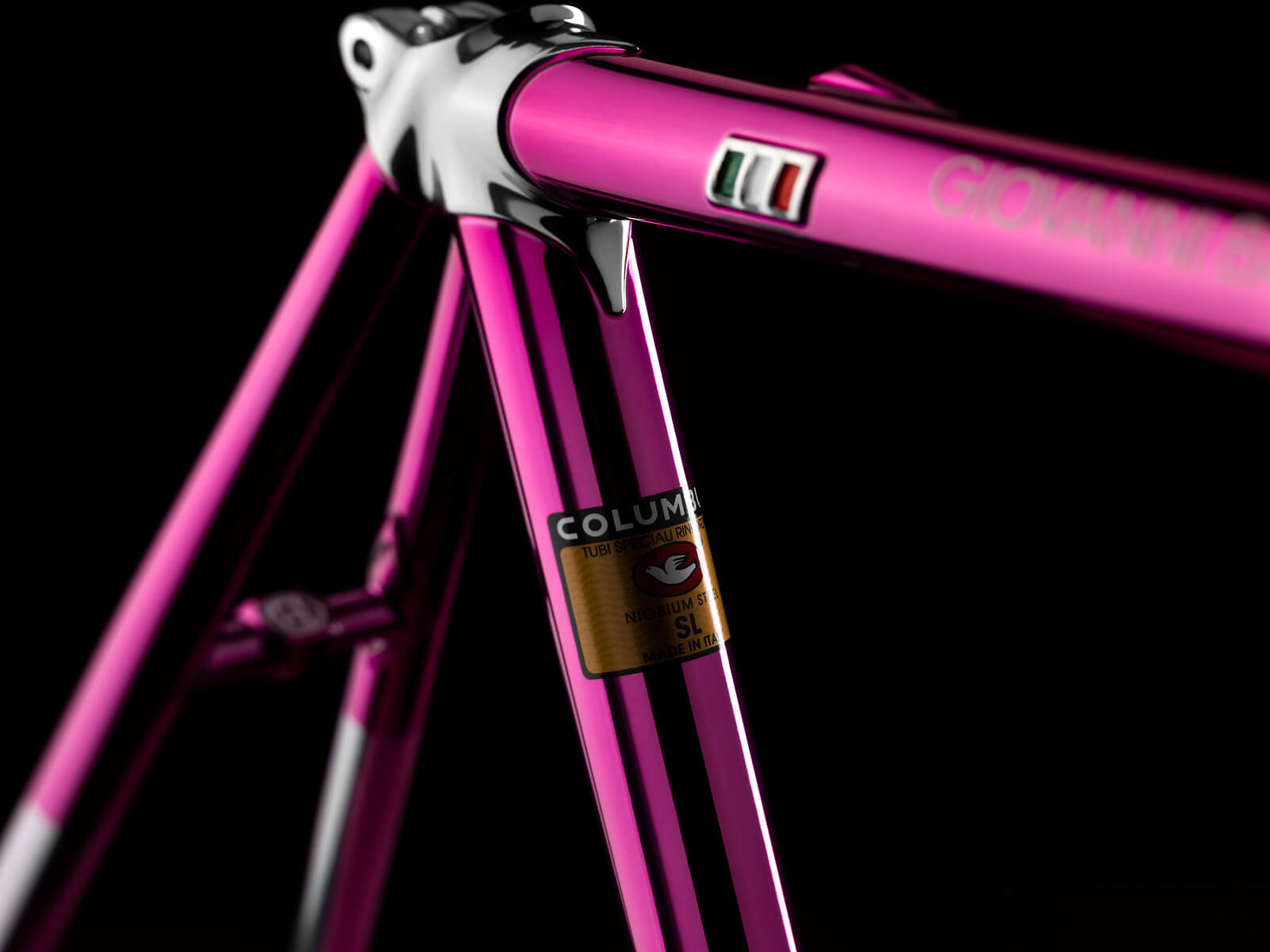 The touch that really puts the “wow factor” into the Arena 1981 frame is the special pink cromovelato finish.

Cromovelato is the most mesmerizing finish you can find on Italian classic steel frames, and it is obtained through a very specific process.

After polishing the raw frame to a mirror finish, we chrome plate it, and then we paint it with colored lacquer.

For a frame celebrating the history of the Pink Race, there was only one color we could choose!

With its colored chrome effect, the Arena 1981’s shine is the ultimate example of the Italian frame builder’s art. 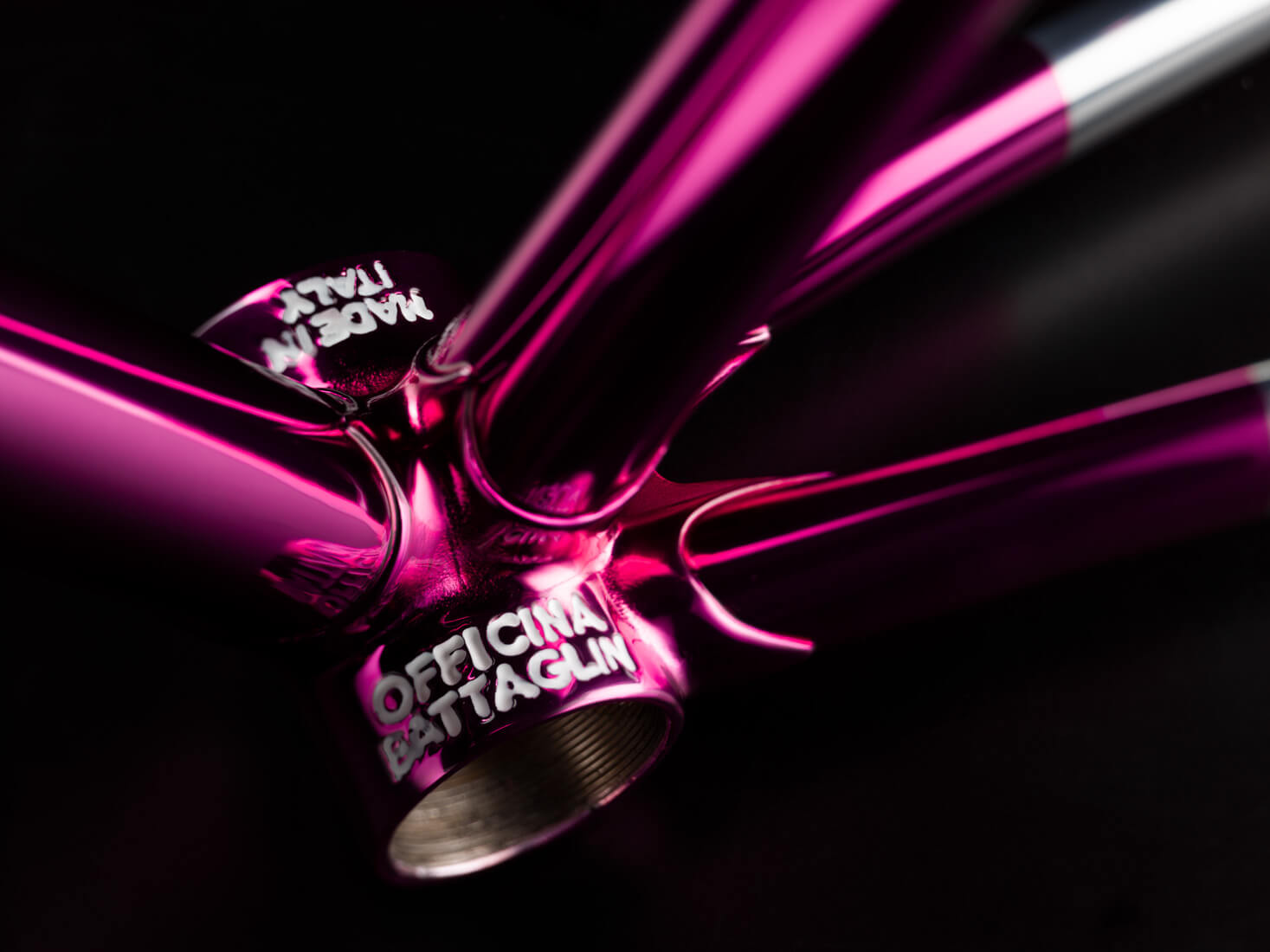 Want to know more about the Officina Battaglin Arena 1981?