"The geometry is tight & responsive but the Power+ soaks up the road in spades!" 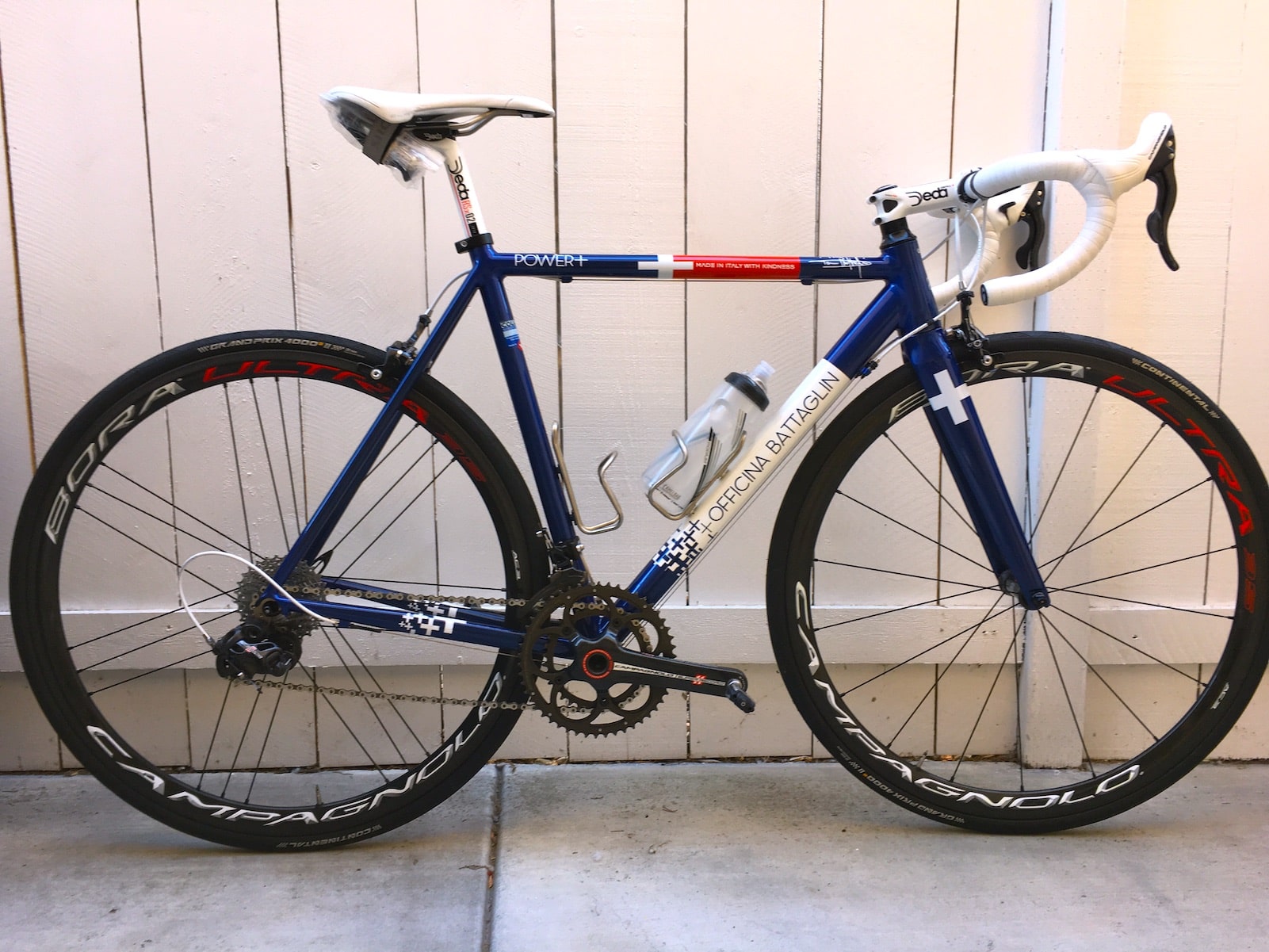 Just a quick note to let you know about how my Power+ is coming along.

For background, I’m a recent convert to cycling having played rugby and raced motorcycles for the last 20 years.

I’m not fast, can’t climb or TT, don’t race or style myself as one but love being outside getting exercise and spending time with riding buddies or meeting new ones.

As you may recall, I was recently on a Fondriest X-Status steel race bike that I loved, a new-old-stock frame that I found and built up with Campagnolo Record 11 gruppo.

However it was too big for me.

Prior to that I was on a Specialized Tarmac which, while being extremely responsive, was tiring to ride after 2 hours.

My hands were always numb which is why I switched to the steel Fondriest.

I learned about Officina Battaglin when your Marosticana was featured in an article in Peloton magazine maybe 2 years ago.

The craftsmanship, paint and backstory of your family’s business hooked me then and I’ve followed the company online ever since.

Truth be told, my dream bike is your Portofino but I was hesitant to commit the funds and time never having bought a bike long-distance before.

I like traditional frame lines and was considering the Power+ but frankly wasn’t enthused with the sloping frame or “racer’s attitude” so when we discussed sizing and ride characteristics and you indicated it would be built in a traditional manner plus with blue colorway I was “all in”!

It’s been about a month now and while I’m still fiddling with some minor set up adjustments I can definitively say it rides wonderfully!

The geometry is tight & responsive but the frame soaks up the road in spades!

My build is a full Campagnolo Super record along with Campagnolo Bora 35 wheels and 25mm tires which I make it handle sublimely.

It corners like on rails, descends super stable, pulls up hills with a lot less effort than what I was used to.

The workmanship is first-rate as is the finish.

I had one fellow ask me how I liked my new carbon bike – the welds are that seamless!

He was shocked it was steel.

Almost everyone is surprised a how light it is, 17.5 lbs., which I think goes a long ways towards demystifying the “steel is heavy” thought.

I’ve ridden about 500 miles on it so far and really love everything about it!

Happy to speak with anyone who is considering one.”

"Thanks Alex and Giovanni for bringing this dream come to live"

“I have been on the look for a while to find the right frame that would match my Campagnolo 50th anniversary group. When Officina Battaglin released the first pictures of the amazing Arena 1981, I instantly realized that this was the perfect match. I quickly ordered mine and with the guidance of Giovanni have build…

"The Power+ EVO: I’ve never seen such a stunning finish. And the bike is so comfortable!"

“6 months later! Here it is. A sneak peek into an absolute work of art from Officina Battaglin. Never seen such a stunning finish. Made to order. Fully custom geometry. Limited to only 40 bikes. The Power+ Evo!” … “Over 20 years on a bike and hundreds of thousands of kilometers… But today, I felt…

"“I will be the peloton’s highlight for at least 6 months because of this beauty!”" 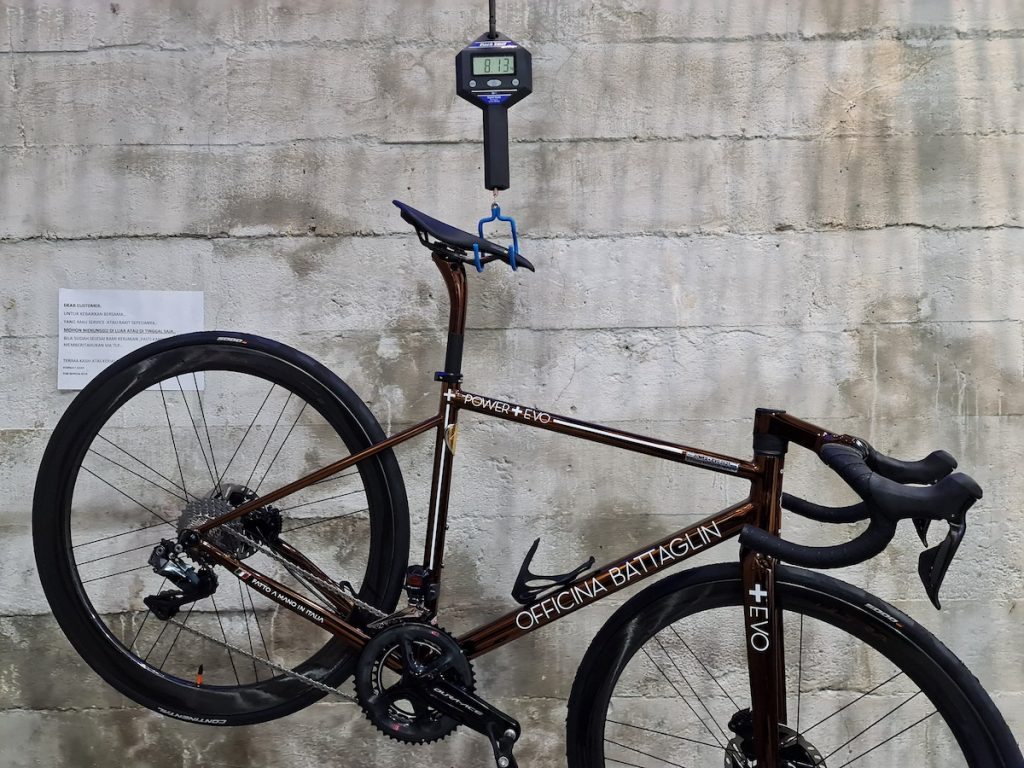 “Dear Alex & Dario, I have received the Power+ EVO safe and sound, and I’ve just finished assembling it.  I put on the Ultra WTO 45 with GP5000 continental 25-mm tires, bike computer mount, carbon bottle cage, and Xpedo pedals. Surprisingly it weighs 8.13kg… Which is not bad at all for a steel bike. Wow……

"The standard of build & finish is simply superb"

“I picked up my frame on Wednesday 11th. I’m absolutely delighted with the same – the standard of build & finish is simply superb – as indeed was the way it was packed for shipment – Many many thanks. I’m now still chasing New Old Stock Campag equipment – my fall back is to take…

"I rode my Portofino in the the world’s toughest amateur race: it’s the most comfortable bike I’ve ever ridden" 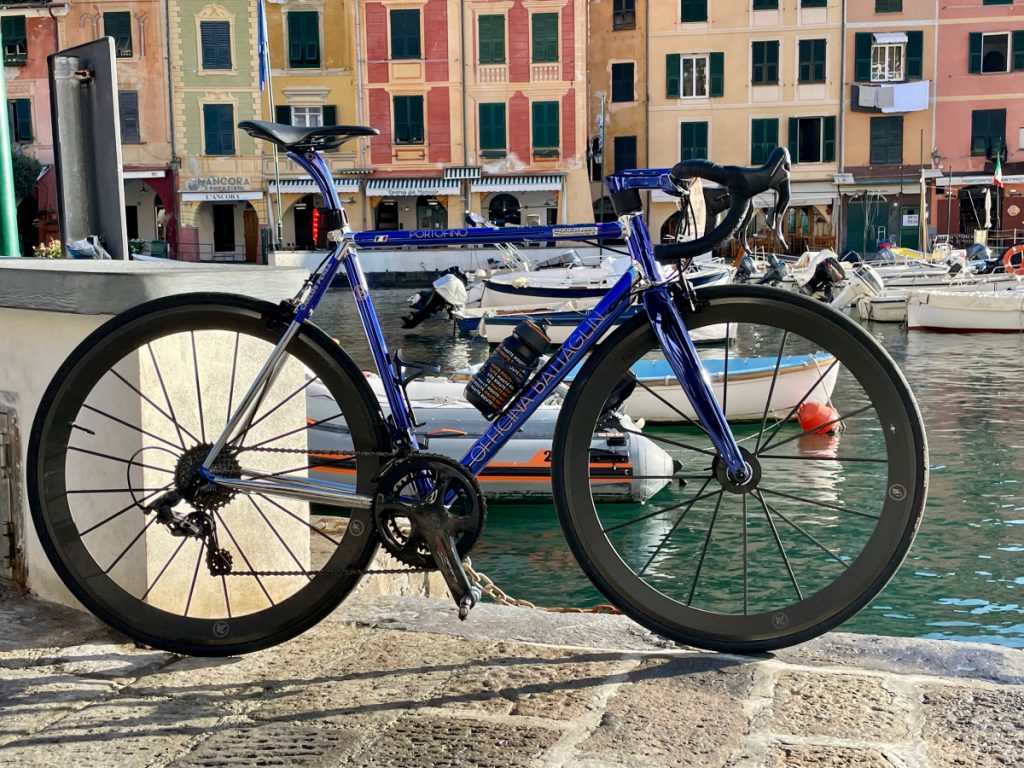 I’m visiting the Battaglin workshop after racing the Haute Route. The Haute Route is a 7-day event famous for being the toughest and the highest amateur race. This time we were 450 riders, and it was just amazing. One of the toughest that we’ve ever done. It was 800 kilometers and almost 22000 meters of climbing..…

“I’ve ridden a lot of bikes; some top of the line carbon fiber, some custom aluminum or steel. I’ve spent almost a year on my Battaglin Power Plus and what I liked at the very beginning about it holds true over 3,000 miles later: it has that wonderful, classic ride feel you expect out of…