"The Power+ feels like a magic carpet to me"

as agreed, I will write some reviews on the Power+ frame or better said the complete bike.
Today, I want to give you my first impressions…

First of all some information on the review and the conclusions I am drawing:
I got the bike 10 days ago and rode it for about 260 km and 2760 m of altitude.

I equipped the frame with the new Campagnolo Chorus groupset (that’s the reason why it took so long to get the bike build up) deda zero 100 parts and dt swiss wheels with 350 hubs and rr 411 rims.

When reviewing this bike I mostly compare it with my recent roadbike, which had “just” an aluminum frame (albeit a performance orientated frame made of 7005 aluminum triple butted and hydroformed tubes with smooth welding and anodized finish), equipped with shimano ultegra, syntace parts and dt swiss wheels.

Even on the first few meters on the bike I immediately felt “at home”.

The size you (and your father) chose is spot-on (you may remember, that I was worrying about that, because this frame is bigger than my old one).

I could ride the bike comfortably with no spacers underneath the stem, however, I will keep two spacers because I plan to ride this frame for many many years and I won’t get younger ;).

The difference in height between the seat and the handlebar is a little less compared to my old bike, however, the reach is slightly longer.

This suits me really well, because as a result of that, the chest feels more “open”, which appears to let me breathe more easily.

I have to confess after the first ride a was thinking “Oh man, this bike is slow!”

But then I checked the speed recordings and compared them with the rides on my old bike and realized that it was not slow at all, in fact I was faster in mean with the Power+.

I realized, that the bike rides so relaxed and confident, that you just don’t feel the speed that much.

No need for scanning the road for the smoothest line, because the bike “ignores” holes and bumps as if they were not there.

No extreme leaning into curves and sprinting out of the saddle to regain speed afterwards, because the power+ corners as if it rides on rails and keeps much more momentum out of the turn.

Two weeks ago I would have confidently called the ride feeling on my aluminum bike as “lively”. Now, compared to the Power+, I would rather say it is “hectic”.

The Power+ on the other hand, feels like a magic carpet to me.

You are floating on the road, but can do the tightest corners with speed and without stress, as if the bike is doing them almost by itself.

It took me a little while to get used to it, but with every additional km I love it more and more…

Of course you know how your bikes look like.

There is just an anecdote I want to tell you.

When I took the frame to the local shop to build it up, everyone seeing it was quite impressed.

2 days after I took to complete bike home, I was at the bike shop to bring my old bike for maintenance.

One of the guys there asked me, when I will bring the Power+ for first inspection (adjustment of the gears and cutting of the fork shaft).

He told me he was on holiday and did not see the complete bike till now but he really wants to.

I think this is something special because this shop is maybe the best-known bike shops in Innsbruck, selling hundreds of road bikes a year and working with Colnago, Bianchi, De Rosa, Pinarello, Alan and others. The Power+, however, is something special… J

"It was very comfortable to ride on the Marosticana"

“The performance of vibration absorption worked well, and it was very comfortable to ride on the Marosticana. I felt very good steering performance when cornering. I could easily draw a beautiful round-shape on the corner with this bike.”

"With my Portofino I’m simply going faster with more ease!" 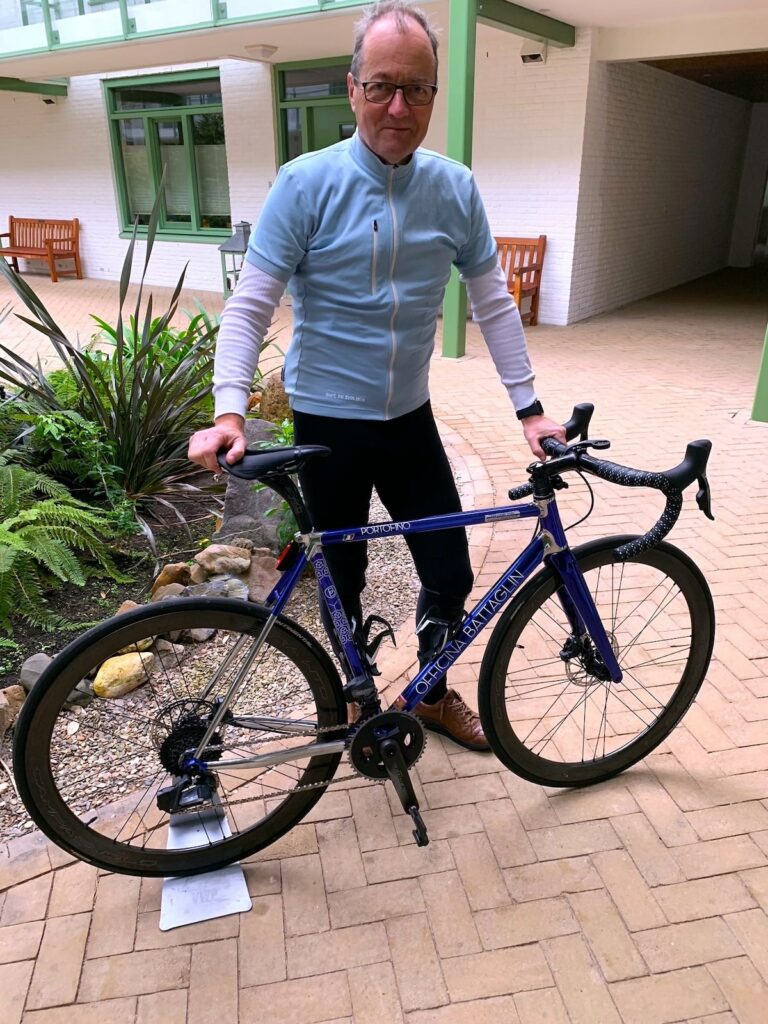 Hello Alex!  As you can see, the Netherlands is quite flat. It’s all flat. This is typically Dutch. And in this world, there’s now a new kind of bike.  A bike that is astonishing… That you can’t compare to anything else.  You know it! But do other people do?  It’s the Officina Battaglin Portofino.  I…

"The Marosticana smoothes everything out beautifully"

“I have tried to choose modern components that function well so that the bike has a classic look but modern performance (Campagnolo Athena 11s., Cinelli stem, Chris King headset with sealed bearings). At last I have had some time to take the Marosticana out for her maiden ride. And a very enjoyable ride it was…

"First ride on the Portofino was so comfortable" 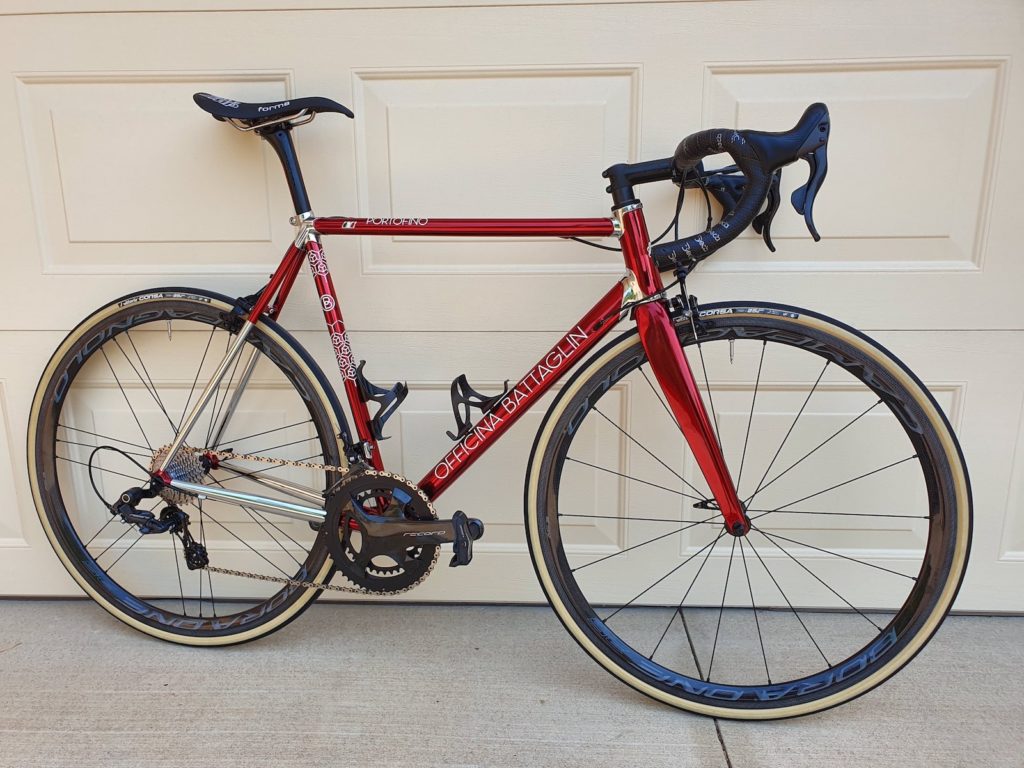 “It all begin with an article on the “Bike Rumour” website.  The Cromovelato finish really attracted my attention, so I checked out the Officina Battaglin website to get more information.   I filled out their enquiry form, expecting to receive a brochure with photos and a price list. Instead, I received a phone call from Alex…

"The Portofino’s final weight is 6.85 kg with Lightweight wheels and 6.90 kg with Mavic wheels" 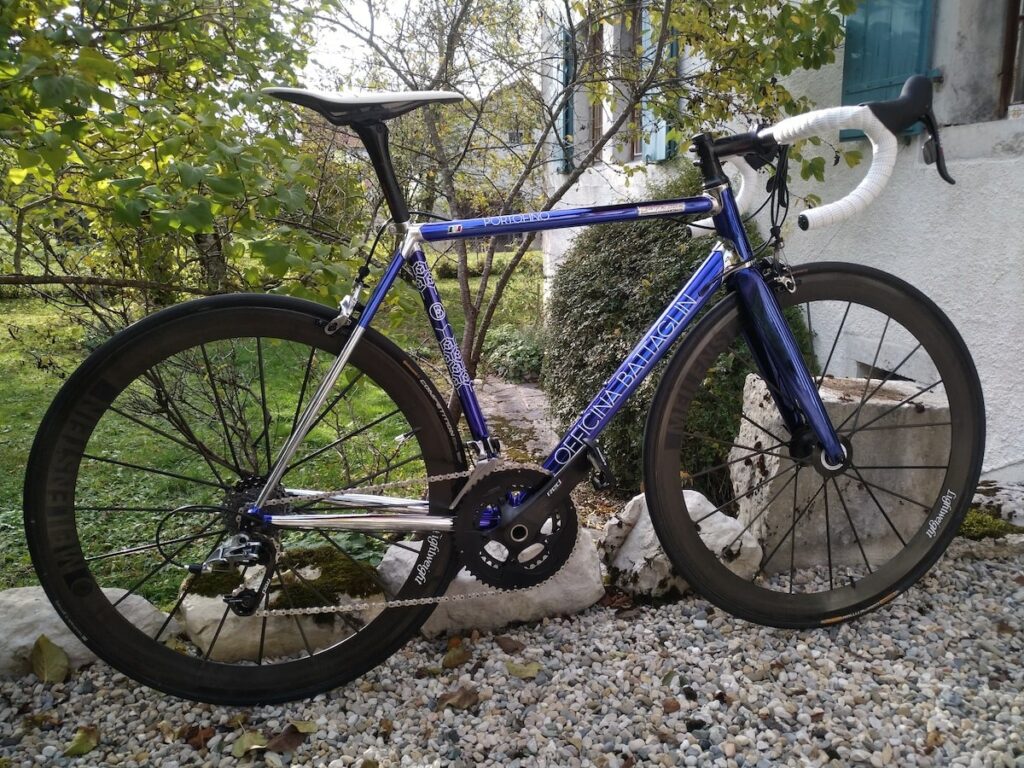 [Testimonial after the assembly, Ed.] “With no pedals, the Portofino’s final weight is 6.85 kg with Lightweight wheels and 6.90 kg with Mavic wheels. We could have made it even lighter by using KCNC brakes (almost 100 gr) and other specific components. But I must say that what we have achieved is absolutely comparable to…

"The Power+ stands out for its balanced ride quality, handling and comfort"

“I want to thank you for such a wonderful bike. I have ridden aluminum, titanium and carbon over the past 30 years and the Power+ stands out for its balanced ride quality, handling and comfort.”